Merkel and Hollande in tough message for Greece

A source close to the French presidency said the two leaders had wanted to have a "straightforward" talk on a host of hot-button topics, from the euro zone to Syria. 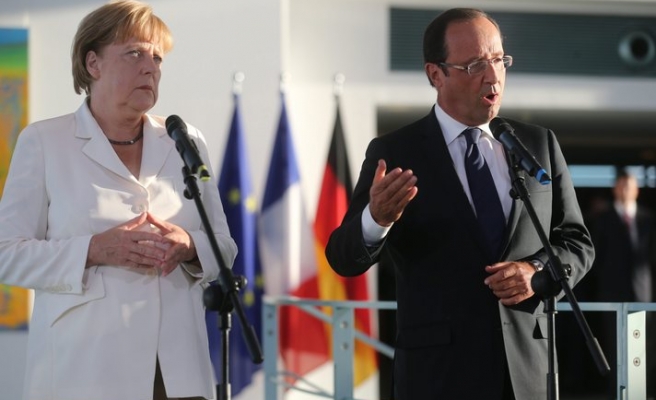 Angela Merkel and Francois Hollande presented a united front towards Greece on Thursday, telling Athens it should not expect leeway on its bailout agreement unless it sticks to tough reform targets.

The German and French leaders met in Berlin to fine-tune their message to Prime Minister Antonis Samaras, who begins a charm offensive in Berlin and Paris this week in the hope of persuading Europe's big powers that Greece deserves patience.

Merkel stuck to her policy of deferring to a report due in September on Athens' progress by the "troika" of international lenders before discussing flexibility on the bailout terms, but said it was vital "that we all stay true to our commitments".

"But we will, and I will, encourage Greece to continue on its path to reform, which has demanded a lot of the Greek people," she told reporters before a dinner with Hollande set to be dominated by Greece.

"We want, I want, Greece to be in the euro zone, it's a desire we have expressed since the start of the crisis. It's up to the Greeks to make the effort that is essential for that goal to be met," said France's Socialist president, standing alongside Merkel.

German sources who attended the working dinner later told Reuters the two leaders had vowed to work "together and with resolve" to overcome the euro zone crisis and had also agreed that "credibility" was the key to rescuing Greece.

A source close to the French presidency said the two leaders had wanted to have a "straightforward" talk on a host of hot-button topics, from the euro zone to Syria.

Hollande plans to visit Spain on Aug. 31 and Italy in early September, the source said. Both countries have seen their borrowing costs shoot up this summer amid market fears that the euro zone may start to unravel.

Samaras has given interviews to German media stressing that while Athens may seek more time to meet its fiscal targets, it is not asking for more money. But German Finance Minister Wolfgang Schaeuble and others seemed unconvinced.

"More time is not a solution to the problems," Schaeuble said, addressing Samaras' hopes that his country might be given four years instead of two to push through painful economic reforms, to alleviate the impact on the Greek people.

Schaeuble said more time could also mean "more money" and Europe's help for Greece had already "gone to the limits of what is economically viable".

From the sidelines, Dutch Finance Minister Jan Kees De Jager - a staunch ally of Berlin - urged Germany to "stick with its strict position" and giving Greece more time would not help.

European leaders say any decisions on Greece will depend on the report by inspectors from the "troika" - the European Commission, the European Central Bank and the International Monetary Fund.

Samaras is seeking what he calls "a bit of air to breathe" at a moment of rare optimism on financial markets that the EU and ECB are poised for decisive action on the euro debt crisis.

Behind their stern public message, Berlin and Paris may have little choice but to show some flexibility, with little appetite in either capital for forcing Greece out of the euro zone.

In talks that also touched on banking supervision in Europe and the role of the ECB, as well as civil war in Syria, Merkel and Hollande hoped to replicate the "Merkozy" alliance that gave the euro zone some semblance of unified leadership under Hollande's predecessor Nicolas Sarkozy.

The German sources described the atmosphere at Thursday's dinner as good.

The Franco-German axis has been strained by Hollande's calls for more measures to stimulate growth, a rebuff to Merkel's strict agenda of austerity. Some German officials say the relationship with Hollande is off to a rocky start.

As Merkel prepares to campaign for a third term in 2013, in a country where the media is taking an increasingly tough line with Greece, she cannot cede too much to Samaras - or to the French Socialist government, which is allied with her main domestic opponents, the Social Democrats.

With German patience wearing thin after repeated requests for financial help from Greece, Spain, Portugal and Ireland, Merkel is under pressure to defend taxpayers' interests while also upholding the stability of the currency.

Merkel will be watching Hollande's attempts to meet his own deficit targets with spending cuts and tax measures in the 2013 budget, German officials say.

"If Hollande gives up on his targets because of rising domestic political resistance, we can hardly expect more painful reforms from states like Italy or Spain," said one government source in Berlin, speaking on condition of anonymity.

There are signs that Merkel's conservatives, if not ready to postpone Greek reform targets, may also find ways to be flexible if the troika finds Athens is broadly in compliance.

"With Greece, we cannot change the cornerstones of the aid package or tamper with the principle of conditionality. But I can imagine we could adapt certain things within that framework such as interest rates or maturities on credit, like we already did with the first package," said Norbert Barthle, a member of parliament from Merkel's ruling centre-right coalition.

Jean-Claude Juncker, head of the Eurogroup of euro zone finance ministers, said Greece was staring at its "last chance" to avoid bankruptcy.