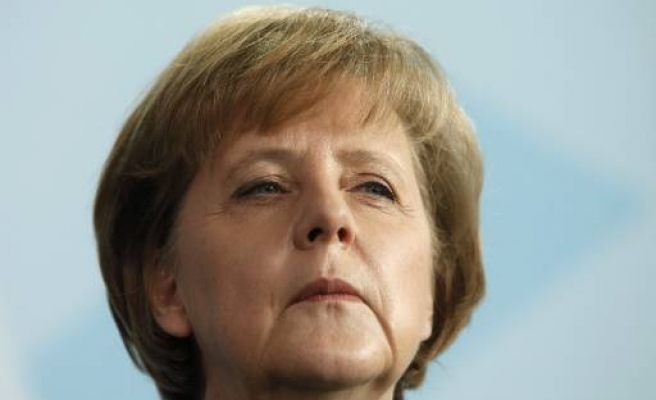 German Chancellor Angela Merkel's cabinet approved new powers for the euro zone's bailout fund on Wednesday, kicking off a month-long battle to convince sceptics in her conservative camp to back efforts to contain the bloc's crisis.

Concerned that Germany is ceding too much power to Brussels, some members of Merkel's centre-right coalition have threatened to vote against bolstering the fund -- the European Financial Stability Facility (EFSF) -- when the Bundestag lower house of parliament meets on Sep. 29.

If enough conservatives rebel and Merkel is forced to rely on opposition parties to pass the legislation, she could face pressure to dissolve parliament and call early elections, although the chances of that seem slim.

"It is very important to get new powers for the EFSF passed swiftly, not just because it is expected to assume the bond-buying role of the ECB, but simply because the commitment of resources sends a very strong signal of reform momentum in the euro area," said Silvio Peruzzo, European economist at RBS in London.

"Our working assumption at the moment is that Germany is fully on board to give the EFSF new powers. But we are at a point where the political capital is being tested," he said.

Euro zone leaders last month agreed to boost the effective size of the EFSF to 440 billion euros ($635 billion) and give it extra powers, including a potential role in helping to recapitalise banks.

In a sign of how important the current debate in Germany is for investors, news of the cabinet approval pushed the euro up to session highs against the dollar.

There are fears that if Berlin insists on parliament having a greater say in the EFSF, other countries will too, limiting the fund's ability to act swiftly to save stricken states.

Faltering economic growth in the 17-nation euro zone risks prolonging the debt crisis, which began nearly two years ago and has since spread from peripheral states like Greece, Portugal and Ireland -- all of which have received bailouts -- to bigger economies like Spain and Italy.

Finance Minister Wolfgang Schaeuble said an expanded EFSF that would have powers to intervene in bond markets and provide precautionary credit lines to troubled member states would help the bloc "prevent contagion in good time".

With nearly two dozen lawmakers from Merkel's centre-right reported to be considering voting against the stronger EFSF, conservative leaders have come up with a proposal to assuage fears the Bundestag will be bypassed on future aid decisions.

German lawmakers' insistence on having more influence over the deployment of the rescue fund is expected to be upheld by Germany's top court next week.

In what will be a landmark ruling on lawsuits brought by six leading eurosceptics, many legal experts expect the Constitutional Court to say on Sep. 7 that Berlin broke no laws by contributing to euro zone bailout funds, but that parliament should be consulted more.

The plaintiffs, whose case reflects wider unease in Germany about continuing to use German taxpayers' money to help less fiscally-disciplined European partners, say this breaks a "no bailout" clause in the European Union treaty.

As Europe's biggest economy, Germany foots more than a quarter of the bill for euro zone bailouts.

"Governments in the euro zone can no longer assume they can take decisions that affect their citizens very closely without consulting their parliaments," said political scientist Oskar Niedermayer at Berlin's Free University.

"It has become clear that this no longer works in Germany, and I think parliaments elsewhere in the euro zone will be even more difficult," he said.

Not the final hurdle

The Bundestag vote on Sep. 29 will be followed by a vote in the upper house (Bundesrat) the next day, which would allow ratification of the EFSF by the end of the month as Merkel and French President Nicolas Sarkozy have promised.

Under Barthle's proposal, the Bundestag budget committee would be informed of minor EFSF decisions but there would be a fuller parliamentary consultation in other cases.

Merkel's conservative coalition has 330 seats in the 620-seat Bundestag. If 20 or more of her allies dissent, she may be forced to rely on leftist opposition parties -- the Social Democrats (SPD) and Greens -- to pass the measures.

"I think Merkel will get the majority she needs simply because the pressure is so high," said Niedermayer. "Lawmakers know that if they don't deliver that, there is a chance of the coalition falling apart, leading to new elections."

The coalition parties themselves will write up the draft law and present it to parliament in order to speed up the ratification procedure and ensure it is passed by month end.

Even then, Merkel's euro zone worries will be far from over. This month Germany also starts discussing the permanent bailout fund that is to become operational in mid-2013, the European Stability Mechanism (ESM), which has to be ratified by year-end.

Frank Schaeffler, a lawmaker with the Free Democrats, junior partners in Merkel's coalition and a bailout sceptic, said it was possible she would manage to push through the EFSF, "but I don't believe the Bundestag will give her a majority on the ESM".