Senior German coalition leaders have signalled there is little chance of that and Merkel herself poured cold water on far-reaching concessions. 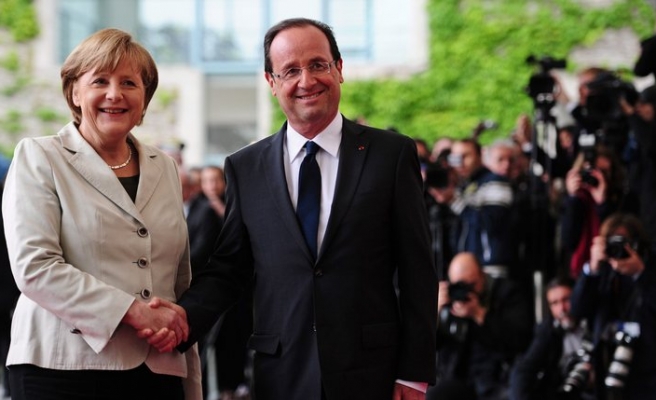 Angela Merkel and Francois Hollande are expected to tell Greek Prime Minister Antonis Samaras this week that they can give him little leeway on easing the terms of his country's bailout agreement.

The French and German leaders meet on Thursday to fine-tune their joint message to Samaras, who is on a charm offensive seeking more time for Athens to meet its bailout commitments.

Senior German coalition leaders have signalled there is little chance of that and Merkel herself poured cold water on far-reaching concessions on Wednesday.

"I am going into these talks with the awareness that we have to achieve that every partner sticks to his commitments," Merkel told reporters during a trip to Moldova.

The chancellor may also lean on France's new Socialist leader to set an example to the euro zone by applying some austerity himself in France's 2013 budget debate next month.

Merkel receives Samaras on Friday and Hollande receives him on Saturday, at a moment of rare optimism on financial markets that the European Union - especially the European Central Bank - is poised for decisive action on the euro zone debt crisis.

The ECB has attempted to dampen talk that it could come to the aid of euro states like Spain and Italy by capping spreads on their bonds. On Greece, Samaras is hoping creditors will let him spread out painful economic reforms over four years instead of two to soften their impact on the population.

"All we want is a bit of 'air to breathe' to get the economy running and to increase state income. More time does not automatically mean more money," Samaras told the German daily Bild in an interview ahead of his visit.

In a country that is tiring of funding repeated bailout requests from its weaker euro zone partners, German officials defer questions about giving Athens more latitude to the results of a "troika" mission by the EU, ECB and International Monetary Fund, which are due in September.

The centre-left French government is careful to strike a balance between Hollande's preference for growth measures over austerity and the recognition that Athens must reign in public spending as a condition for international aid.

"The president has always maintained it is indispensable for Greece to respect its commitments while at the same time it should be given hope for growth," an aide to Hollande said.

Rainer Bruederle, parliamentary group leader for the junior German coalition partner the Free Democrats, has said that Greece will have to cut its deficit below 3 percent by the end of 2014. His counterpart for Merkel's conservatives, Volker Kauder, categorically ruled out any changes to the time frame.

But Berlin and Paris may meet halfway, with signs that Merkel's conservatives, if not ready to postpone the targets, may be ready to show Athens other leeway if the troika finds it meeting the broad terms of its rescue package.

"With Greece, we cannot change the cornerstones of the aid package or tamper with the principle of conditionality. But I can imagine we could adapt certain things within that framework such as interest rates or maturities on credit, like we already did with the first package," said Merkel MP Norbert Barthle.

Eurogroup chief Jean-Claude Juncker said Greece was staring at its "last chance" to avoid bankruptcy, but a decision to grant more time would depend on the findings of thy troika.

"As far as the immediate future is concerned the ball is in the Greek court," Juncker said during a visit to Athens. "In fact this is the last chance and Greek citizens have to know this."

Merkel and Hollande will try to project confidence they can go some way towards replicating the "Merkozy" alliance that gave the euro zone some semblance of leadership under Hollande's predecessor Nicolas Sarkozy.

"The European Union faces important issues in the second half of 2012, including Greece, further development of economic and currency union, and independent bank oversight for Europe," said Merkel's spokesman Steffen Seibert.

"These are issues that Germany and France should agree on and find a common path," said Seibert, setting out the agenda for Thursday's talks between the two leaders.

"It's not just about balancing budgets, although we must hold to that, it's also about growth," French Prime Minister Jean-Marc Ayrault said of Hollande's visit.

But some German officials say the relationship is off to a rocky start, which might explain why the pair will only give a brief statement at 7 p.m. (1700 GMT) before they meet, rather than a full news conference after their talks.

"Greece is the first big test for Hollande and Merkel after the summer break," Daniela Schwarzer of the German Institute for International and Security Affairs said. "Hollande's second will be to present the 2013 French budget by the end of September."

After Hollande managed to weigh down Merkel's European pact for budget responsibility with his pro-growth measures, she will be watching closely his attempts to meet his own deficit targets with spending cuts and tax measures, German officials say.

"If Hollande gives up on his targets because of rising domestic political resistance, we can hardly expect more painful reforms from states like Italy or Spain," said one government source in Berlin, speaking on condition of anonymity.