German Chancellor Angela Merkel sought on Tuesday to quash talk of an imminent Greek default as the United States voiced concern at the euro zone's inability to stem its debt crisis. 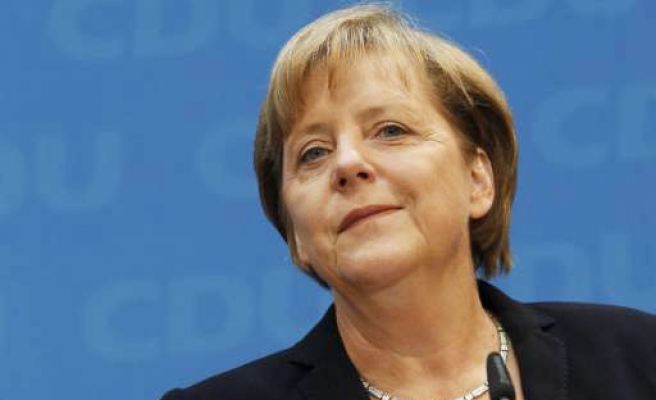 German Chancellor Angela Merkel sought on Tuesday to quash talk of an imminent Greek default as the United States voiced concern at the euro zone's inability to stem its debt crisis.

Market confidence in the 17-nation currency area suffered another blow when Italy had to pay the highest yield since it joined the euro in 1999 to sell 5-year bonds. And the chief executive of carmaker Fiat warned that the euro system "could go off the rails" if EU leaders do not get a grip.

Merkel said in radio interview that Europe was doing everything in its power to avoid a Greek default and urged politicians in her own coalition to weigh their words carefully to avoid creating turmoil on financial markets.

Asked by RBB inforadio whether a Greek default would doom the euro, she answered: "We are using all the tools we have to prevent this. We need to avoid all disorderly processes with regards to the euro."

Calling Europe's challenge "historic", Merkel added that everything must be done to keep the euro zone intact "because we would see domino effects very quickly".

Merkel and French President Nicolas Sarkozy conferred by telephone on the crisis on Monday, a senior French government source told Reuters, but Sarkozy's office said there was no plan to issue a joint statement on Greece on Tuesday, which the source had said was coming. There was no immediate explanation.

U.S. President Barack Obama told Spanish journalists in a group interview published on Tuesday that euro zone leaders needed to show markets they were taking responsibility for the debt crisis. Weakness in the global economy would persist so long as it is not resolved, he said.

In a measure of growing alarm in Washington, Treasury Secretary Timothy Geithner will take the unprecedented step of attending a meeting of EU finance ministers in Poland on Friday. It will be his second trip to Europe in a week after he met his main EU counterparts at a G7 meeting last weekend.

Obama said that while Greece is the immediate concern, an even bigger problem is what may happen should markets keep attacking the larger economies of Spain and Italy.

"In the end the big countries in Europe, the leaders in Europe must meet and take a decision on how to coordinate monetary integration with more effective co-ordinated fiscal policy," the news agency EFE quoted him as saying.

Markets have already priced in the near certainty of a Greek debt default. Credit default swap prices suggest a 90 percent probability of default in the next five years, according to CDS pricing data provider Markit.

Greek TV said Prime Minister George Papandreou would hold a conference call with Merkel and Sarkozy on Wednesday. International inspectors are due to return to Athens to review deficit-cutting steps before deciding on the next tranche of aid.

Greece has said it only has a few weeks' cash and needs the 8 billion euro tranche in October to pay salaries and pensions.

Pressure on Italy mounted on Tuesday at a bond auction that showed the limits of European Central Bank efforts to hold down Rome's borrowing costs by buying government bonds in return for austerity measures to cut its budget deficit.

The five-year bond yield hit a euro lifetime high of 5.60 percent despite ECB purchases in the secondary market that led to the resignation of the central bank's German chief economist, Juergen Stark, last Friday.

"Markets want to see decisive action and they want to see someone in control of the situation," said Marc Ostwald, an analyst at Monument Securities in London.

"Nothing that we've had, be it at a domestic level in Italy, be it at a pan-euro zone level, or above all from Germany, indicates that anyone really is getting to grips with presenting euro zone policy with one voice," he said.

The CEO of Italian carmaker Fiat, Sergio Marchionne, asked at the Frankfurt car show whether the euro's survival was at risk, told reporters: "I think there is a possibility, if the wrong steps are taken, that the system goes off the rails."

Hopes that China might step in as a saviour to buy Italian bonds, after an Italian request and recent talks, failed to provide much support for the auction.

Italian Economy Minister Giulio Tremonti met Chinese officials last week including the head of its sovereign wealth fund, a Treasury spokesman said, after the Financial Times reported that Rome had asked China to buy "significant" quantities of its bonds.

A Chinese Foreign Ministry spokesman said Beijing had confidence in Europe's ability to handle its debts, but sought assurances that Europe would ensure the safety of its investments in the region.

Wu Xiaoling, a former deputy governor of the People's Bank of China, told Reuters on Tuesday that investor "panic" about Europe's debt crisis was unnecessary, and China was ready to work with others to boost market confidence.

Chinese leaders have repeatedly offered verbal support to Greece, Portugal and Spain but encouraging words have not so far been matched by spectacular action.

China held just over 7 percent of euro zone government bonds at the start of this year, according to an estimate published by the French business daily La Tribune and confirmed privately by a senior EU official as "in the ballpark".

Beijing has continued to buy European debt this year but traders say the volume has been modest and mostly in high-grade paper rather than bonds of the weaker peripheral countries.

French bank shares fell further on Tuesday after losing 10 percent on Monday due to market concern about their exposure to Greek and other peripheral EU debt.

Markets have been unsettled by growing talk among German politicians about the likelihood of a Greek default and a possible suspension of Greece from the single currency area.

In a note published on Tuesday, Citigroup chief economist Willem Buiter said a Greek exit from the euro zone would be a "financial and economic disaster" for both Athens and the remaining 16 members. Such a step would have severe economic and political implications for the broader EU and global economy.

"As soon as Greece has exited, we expect the markets will focus on the country or countries most likely to exit next from the euro area," Buiter said.

Merkel said the euro zone would only have a procedure for an orderly default in place from 2013, when a permanent crisis resolution mechanism is due to come into effect.

"In a currency union with 17 members, we can only have a stable euro if we prevent disorderly processes. Therefore it is our top priority to avoid an uncontrolled default, because it would hit not only Greece. The danger would be very high that it would hit many other countries," she said.

Obama's comments suggested that Washington is trying to nudge European governments towards closer fiscal union or a bigger bailout fund to recapitalise teetering banks but European politics, especially in Germany, make that difficult.

Merkel suggested the way forward should involve sharper punishment for states that violate the bloc's budget discipline rules, which have been repeatedly breached in the last decade, including by central euro zone powers Germany and France.

"Until now, for example, if countries violate the Stability and Growth Pact they cannot be taken before the European Court of Justice," she said