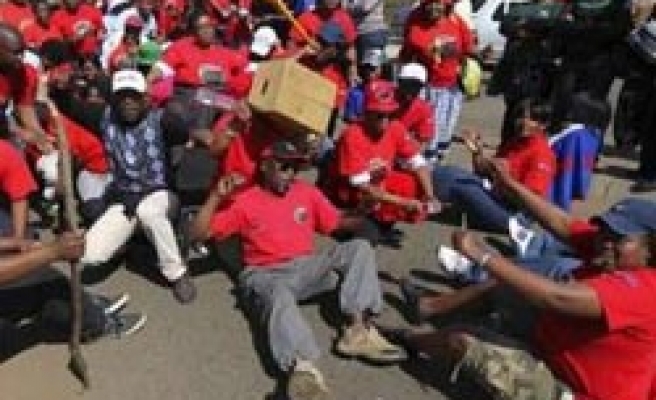 More than one million South African state workers went on strike for more pay on Wednesday, threatening a prolonged action they say will bring the government in Africa's largest economy to a halt.

The strike, punctuated by reported scuffles at hospitals and schools, is not immediately expected to have a major economic impact but a protracted work stoppage could hurt commerce at home and trade abroad.

"We have nothing to lose but the chains that bind us," said Norman Mampane, national spokesman for the POPCRU police and prison guards' union, which is one of the groups in the labour coalition representing about 1.3 million state workers.

Economists worry that whatever deal is reached will swell state spending as the government tries to bring its deficit down from 6.7 percent of gross domestic product.

"As government, as the employer, we have indicated and demonstrated for all to see that our capacity to afford is actually exhausted," Public Services Minister Richard Baloyi told a news conference in Cape Town.

Baloyi said a deal would cost at least 5 billion rand ($690 million) more than budgeted and cuts would have to be made elsewhere. He repeated a threat that the government could unilaterally impose its wage offer to end the standoff.

Analysts expect a deal to be reached in the next few days at the earliest or before September at the latest, which would curtail economic damage.

The groups staged a one-day warning strike last week and said the action on Wednesday could be the start of the largest civil servants' strike in three years. A senior official with the country's biggest labour federation COSATU said 90 percent of unionised civil servants walked off the job.

The strike increases pressure on President Jacob Zuma's ruling African National Congress to reach a deal with organised labour and appease the party's longstanding union allies who also have been a reliable source of votes.

But pressure will also mount on unions to reach a deal, with labour sources saying some of the groups in the coalition are looking favourably on the government's offer and could sign a deal if the housing allowance was increased.

Public opinion could turn against the unions if a prolonged work stoppage forces parents to find day care for their children, delays treatment at hospitals and slows paperwork at government agencies.

A mid-range civil servant already makes about 40 percent more in wages and benefits than the average South African worker, who takes home 6,383 rand ($880) a month.

Those going on strike include police, healthcare workers, teachers and customs officials. Essential services are expected to be maintained through skeleton staffing.

"Additional pressure on public sector finances and the subsequent need to increase the taxes will have consequential downstream impact on both business and consumers," the South African Chamber of Commerce and Industry said in a statement.

Last week the government offered to increase the monthly housing allowance to 700 rand from a previous offer of 630 rand, but refused to increase its wage rise offer of 7 percent.

Unions are demanding an 8.6 percent pay rise, more than double the inflation rate, and 1,000 rand for housing.

The housing allowance alone would be equal to about one percent of all government spending.

Auto workers who went on strike last week and slowed production in the continent's biggest carmaker also joined the action. They are 15 percent wage hikes.