Obama said his plan would "provide a jolt to an economy that has stalled and give companies confidence that if they invest and hire there will be customers." 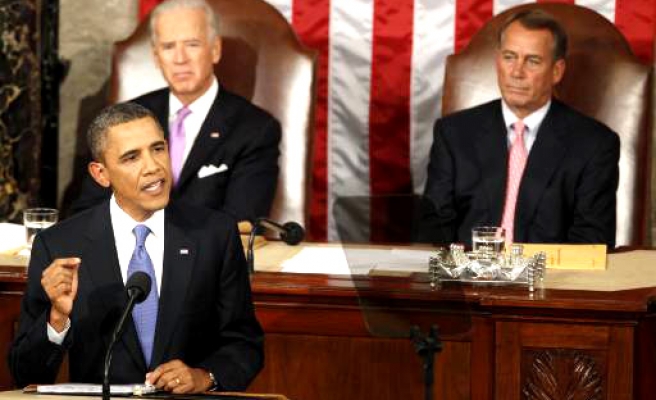 U.S. President Barack Obama challenged Congress on Thursday to enact a $447 billion package of tax cuts and new spending to revive a stalled job market but he faces an uphill fight to win over Republicans and restore public faith in his economic stewardship.

With his poll numbers at new lows amid frustration with 9.1 percent unemployment, Obama called for urgent action on a broad set of proposals he laid out just 14 months before voters decide whether to give him a second term.

"You should pass this jobs plan right away," he said in a forceful, impassioned tone in the televised speech to a rare joint session of Congress.

"The question is whether, in the face of an ongoing national crisis, we can stop the political circus and actually do something to help the economy," Obama said, taking a swipe at Republicans who have consistently opposed his initiatives.

Obama, who pushed through an $800 billion economic stimulus package in 2009, said his new plan would cut taxes for workers and businesses and put more construction workers and teachers on the job through infrastructure projects.

As fears rise of another U.S. recession and more global economic gloom, G7 finance ministers meeting in France on Friday are set to encourage countries that can afford it to do more for growth.

Estimates from several economists showed that Obama's jobs package, if passed, could lift U.S. economic growth by 1 to 3 percentage points in 2012, add some 1 million jobs and lower the unemployment rate by about half a percentage point.

"This struck me as a pretty well-balanced plan. It's got something for everybody," said Omer Esiner, senior market analyst at Commonwealth Foreign Exchange in Washington. "If Congress can't agree on something like this then there's not much hope for the paralysis changing."

Bipartisan cooperation could be hard to come by in Washington's climate of political dysfunction where a bruising debt feud this summer brought the country to the brink of default and led to an unprecedented U.S. credit downgrade.

During the speech, Republicans reacted to many of Obama's proposals with stony silence. Party leaders said later they would work with the president to find common ground even if they were unlikely to support the entire package.

"Let's do the things we agree on, set aside the things we differ on and get to work so we can have some results for people who are hurting so badly out there," said Eric Cantor, the Republican leader in the House of Representatives.

Cantor suggested he could support expanding a payroll tax cut that passed Congress last year. But other Republicans said they were not inclined to back it this time.

Obama is seeking to seize the initiative in his bitter ideological battle with Republicans, ease doubts about his economic leadership and turn around his presidency at a time when his re-election bid looks unexpectedly daunting.

He wants Congress to pass his "American Jobs Act" -- which administration officials said would cost $447 billion -- by the end of this year and offset the cost with deficit cuts.

But a deal may be hard to achieve with politicians already focusing on the campaign for the November 2012 election.

If Obama can push through his plan, it might provide an economic boost quickly enough for him to reap political benefits. If it stalls in a divided Congress, his strategy will be to blame Republicans for obstructing the economic recovery.

Obama said his plan would "provide a jolt to an economy that has stalled and give companies confidence that if they invest and hire there will be customers."

He proposed extending unemployment insurance at a cost of $49 billion, modernizing schools for $30 billion and investing in transportation infrastructure projects for $50 billion.

But the bulk was made up of $240 billion in tax relief by cutting payroll taxes for employees in half, to 3.1 percent, next year and trimming employer payroll taxes as well.

A surprise element for economists was that Obama called not just for an extension of the employee payroll tax holiday but for a more generous tax break.

Obama also said he was seeking to broaden access to mortgage refinancing to help the ailing housing market, drawing rare applause from Republicans during the speech.

U.S. stock index futures fell and analysts said investors will await clear signs of how the plan would fare in Congress.

The U.S. Chamber of Commerce, America's most powerful business lobby and a frequent critic of Obama, said the plan "appeared to fall short" and urged him to reduce regulatory uncertainty.

But he seems to have mollified part of his liberal base.

Richard Trumka, president of the AFL-CIO labor federation, praised Obama for an "important" step. Trumka had warned that unions would be judging the plan to decide who to support in the 2012 election.

How much of the jobs package is viable remains in question as almost all of it ultimately depends on winning support from Republicans who control the House.

But Obama insisted that "everything in here is the kind of proposal that's been supported by both Democrats and Republicans -- including many who sit here tonight -- and everything in this bill will be paid for. Everything."

With his repeated exhortation to lawmakers to "pass this bill," Obama made clear he would make the drive a key part of his re-election campaign. He takes his jobs push on the road on Friday with an economic speech in Richmond, Virginia.

Republicans will still be resistant, not wanting to give Obama a helping hand before the election. But they will be under pressure to cede some ground to help boost the economy or risk a voter backlash in 2012.

Obama's choice of a joint session of the House and Senate, a setting better known for the president's annual State of the Union address, was intended to lend ceremonial pomp to a critical speech and push Republicans to cooperate. But it also carried the risk of raising unreasonable public expectations.

Obama's speech took on new urgency after the latest Labor Department report showed zero employment growth in August, stoking fears of a slide back into recession.

Federal Reserve Chairman Ben Bernanke, who has said the onus for helping the economy now lies mainly with lawmakers controlling spending, warned that overzealous belt-tightening could slow down the "erratic" recovery.