Obama said the TPP, in a deadlock largely due to disagreement between the United States and Japan, had the potential to be an "historic achievement". 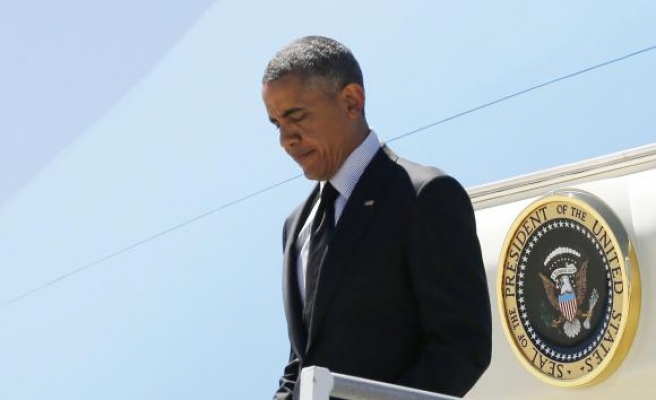 U.S. President Barack Obama said on Monday he sees momentum building for a Washington-backed free trade agreement in the Asia-Pacific, after arriving in Beijing on the first leg of an eight-day Asia tour.

U.S officials had ruled out a major announcement on the ambitious 12-country Trans-Pacific Partnership (TPP) in Beijing, where Obama will attend the Asia-Pacific Economic Cooperation (APEC) forum and meet Chinese President Xi Jinping.

But business leaders attending the APEC forum have been looking for signs of progress on the TPP, especially as China is pushing for a separate trade liberalisation framework called the Free Trade Area of the Asia Pacific (FTAAP).

Obama said the TPP, in a deadlock largely due to disagreement between the United States and Japan over how widely Japan will open its doors to farm exports, had the potential to be an "historic achievement".

"During the past few weeks our teams have made good progress in resolving several outstanding issues regarding a potential agreement. Today is an opportunity for us at the political level to break some remaining logjams," Obama said at a meeting of TPP leaders at the U.S. embassy.

"What we are seeing is momentum building around a Trans-Pacific Partnership that can spur greater economic growth, spur greater jobs growth, set high standards for trade and investment throughout the Asia-Pacific."

Some see a proposed study on the FTAAP plan, which will be presented to APEC leaders for approval this week, as a way to divert attention from the TPP, which excludes China.

TPP leaders said in a statement issued after the meeting that they remained open to including "other regional partners that are prepared to adopt its high standards".

Obama arrives in China seeking to show renewed commitment to his administration's much-touted strategic "pivot" toward Asia, widely seen as an effort to counter China's rising influence. The TPP is at the economic core of that rebalancing effort.

His challenge will be to overcome scepticism among some Asian allies as to whether the United States can fully engage with the region at a time when it is preoccupied with global crises ranging from the fight against Islamic State militants in Iraq and Syria, the spread of Ebola and the conflict in Ukraine.

At the same time, the drubbing Obama's Democrats took in last week's midterm congressional elections will hardly strengthen his position in talks with China or with allies in the region. Many may see him as a diminished leader on the world stage in the final two years of his presidency.

Although negotiations on the TPP have been slow-moving, one of the areas where a new Republican-controlled Congress might actually help Obama is by easing passage should a trade deal be reached.

"This is not an agreement that is about to get signed. This will take a period of time to finish off some of the difficult issues and to have a full discussion domestically in the United States and elsewhere," a senior U.S. official said after the TPP talks, adding that there was no deadline for a deal.

Some trade experts note that reaching agreement before U.S. presidential electioneering picks up next summer could be crucial to avoiding U.S. domestic political hurdles.

The TPP would establish a free-trade bloc stretching from Vietnam to Chile and Japan, encompassing about 800 million people and almost 40 percent of the global economy.

Obama's focus on Asia business ties on the first day of his visit underscored his efforts to strike a balance between seeking deeper economic cooperation with a rising China while also challenging Beijing with the U.S. pursuit of the TPP.

Obama was due to speak to a conference of corporate chief executives in Beijing a day after Xi assured them that risks faced by China's economy were "not so scary".

For his part, Obama comes to China boasting a resurgent U.S. economy. This could give him added economic clout as he attends regional summits in Beijing and Myanmar and a G20 summit in Brisbane this week, even if his political capital at home appears to have waned.