Obama's speech reflected a more aggressive defense of Democratic principles after he took a battering in two previous budget battles with Republicans this year, which helped drive his approval rating to new lows 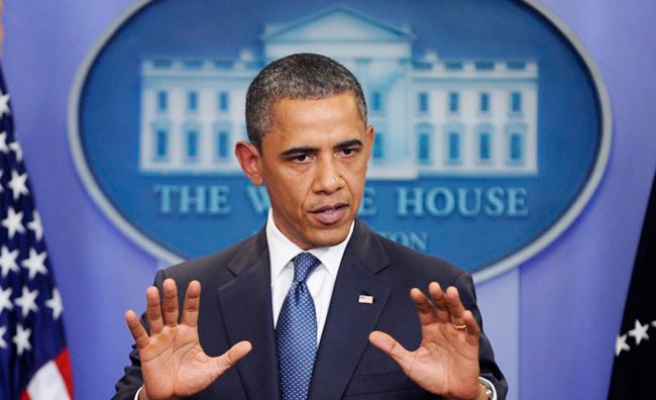 President Barack Obama laid out a $3.6 trillion plan on Monday to cut U.S. budget deficits partly by raising taxes on the rich, but Republicans rejected it as a political stunt and made clear the proposal had little chance of becoming law.

Vowing to veto any plan that relies solely on spending cuts to reduce deficits, the Democratic president's recommendations set the stage for an ideological fight with Republicans opposed to tax increases that will stretch through Election Day 2012.

"I will not support any plan that puts all the burden of closing our deficit on ordinary Americans," Obama said. "We are not going to have a one-sided deal that hurts the folks who are most vulnerable."

Obama's speech reflected a more aggressive defense of Democratic principles after he took a battering in two previous budget battles with Republicans this year, which helped drive his approval rating to new lows.

Most Americans say they are unhappy with Obama's economic leadership, and the president's re-election hopes could hinge on his ability to convince voters that Republicans represent the rich, not the middle class.

On Monday, he repeatedly said all Americans must pay their "fair share" of taxes, and he sharpened the difference between his vision for America and that of Republicans in a speech meant to regain support among core supporters who have said Obama has failed to stick to liberal principles.

Republicans have consistently opposed any measures resembling tax hikes, saying they will hurt the struggling economy by increasing the burden on job-creating businesses. Republican leaders stuck to that position on Monday, quickly rejecting Obama's plan.

John Boehner, speaker of the House of Representatives and the top Republican in Congress, said in a speech in Ohio that "class warfare" was not leadership and taxing the rich would not get the economy going again, Cincinnati media reported.

"Giving the federal government more money would be like giving a cocaine addict more cocaine," Boehner said in a speech to small business owners at the University of Cincinnati.

Poitics, but a plan?

Analysts were skeptical Obama's plan would help America's standing with credit rating agencies such as Standard & Poor's, which last month downgraded U.S. government debt and voiced concern Washington was too divided to tackle the problem.

Obama's plan, which will be sent to the "super committee" of six Republicans and six Democrats considering deficit reduction, proposes $3.6 trillion in savings over 10 years.

But roughly half of overall savings come from higher tax revenues, under the president's proposal.

That would include allowing tax breaks for upper-income Americans to expire at the end of 2012, capping popular deductions for things like mortgage interest and charitable donations, and closing corporate tax loopholes.

"This is purely politics, aimed at Obama's demoralized base. It undoubtedly has been poll-tested, so now Obama has a populist campaign issue. There's obviously no chance this could pass" on a vote in Congress, said Greg Valliere, chief political strategist at consultancy Potomac Research Group.

Rudolph Penner, a former director of the Congressional Budget Office, said rating agencies would not be impressed by Obama's failure to recommend deeper healthcare cuts.

"If I were S&P I would not change my rating on the basis of this proposal," he said.

Obama's call to overhaul the U.S. tax code included a "Buffett Rule," named after billionaire investor Warren Buffett, that would set a minimum tax rate for people earning more than $1 million a year.

It would only affect a tiny minority of the millions of Americans filing tax returns. But Obama aides say it would set a standard of fairness that would boost revenue if applied.

Just hours after unveiling his plan, the president headlined a Democratic party fundraiser in New York attended by about 60 people paying $35,800 a plate.

Standing in a posh apartment on Manhattan's Upper East Side, Obama said he was confident the American people supported his vision, and took a swipe at the Republicans opposing him.

"What has been clear over the past 2 1/2 years is we have not had a willing partner. ... What we've seen is some irreconcilable differences, a fundamentally different vision about where America needs to go," he said.

"Obama's new plan is both a serious legislative proposal and an effort to stake out his ground for his re-election campaign," said Sarah Binder of the Brookings Institution.

The super committee must propose a deficit plan by Nov. 23. Congress must then vote on the panel's proposal by Dec. 23 or automatic spending cuts will be triggered across government agencies, beginning in 2013.

It will meet behind closed doors on Tuesday for its first deliberative meeting. "Presumably we are going to start throwing some ideas out," said Republican Senator Jon Kyl, a panel member.

Obama said his plan, together with savings agreed to under an August debt ceiling deal, will cut over $4 trillion from the 10-year deficit, helping deflect Republican claims he is a "tax-and-spend liberal" that have hurt him with independent voters.

Obama's suggestions do not raise the eligibility age for Medicare recipients, something he proposed during debt ceiling negotiations with Boehner over the summer.

Instead, he is proposing something more palatable to the left wing of his party -- $248 billion in savings from Medicare, the government health program for the elderly.

Most of that would come from reducing overpayments to healthcare providers.

Medicare and Medicaid are viewed by analysts as the biggest contributors to long-term U.S. deficits, a driving issue in the election. The U.S. budget deficit in 2011 is expected to be about $1.3 trillion.