Pakistan turns to IMF for loan to cope with floods

Zardari said on Monday that the disaster would have a "major and lasting" impact on Pakistan's economy. 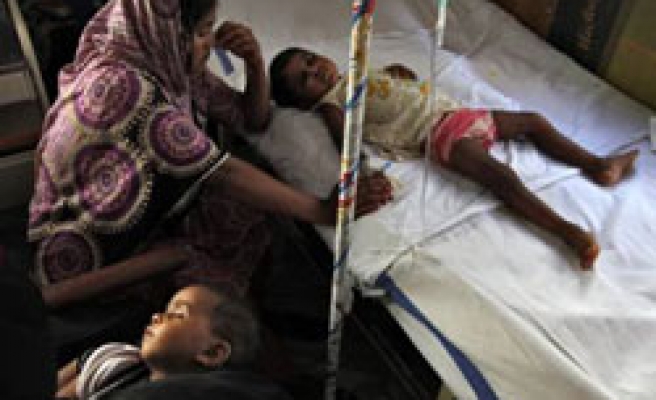 Pakistani officials will reportedly press the International Monetary Fund (IMF) to loosen the terms of a $10 billion loan in an effort to cope with the worst floods in the country's history.

The two sides met in Washington DC on Monday, where they were set to discuss the flooding and the scheduled release of the final instalment of a $10.66 billion loan extended by the IMF in 2008.

"Pakistan will seek a revision of conditionalities on the existing [loan] and might also look at the possibility of further borrowing," Farahnaz Ispahani, a spokesman for president Asif Ali Zardari, told the Telegraph newspaper on Sunday.

Zardari himself said on Monday that the disaster would have a "major and lasting" impact on Pakistan's economy.

He added that recovering from the floods would take at least three years.

The IMF has said the floods will present "a massive economic challenge" to Pakistan and that it will look at ways it can assist.

"The IMF stands with Pakistan at this difficult time and will do its part to help the country," the organisation said in a statement on Saturday.

The worst floods in decades have been spreading through the rice-growing belt in southern Sindh province district by district, breaking through or flowing over embankments.

International Organization for Migration spokesman Saleem Rehmat told reporters about 80 percent of the 3.9 million people in Sindh affected by the floods were displaced.

Hundreds of thousands of people have fled cities, towns and villages in the province for safer ground, disaster management officials said, adding that growing water pressure in the Indus River was one of their biggest concerns.

Food is running out in remote villages. Two exhausted-looking men wading along a flooded road in Sindh in search of supplies said they had walked for three days from their flooded village.

One of the men, Daim, was carrying a sick-looking chicken and two nearly lifeless large chicks in a basket on his head. There had been a third chick but he and his hungry companion had roasted it the night before, he said.

In other parts of the country, the scale of the humanitarian disaster is gargantuan, and growing.

At least half a million people are living in schools in flood-hit areas. The cramped, unhygienic conditions, combined with food shortages and intense heat, raise the specter of potentially fatal disease outbreaks, such as cholera.

There are more than 120,000 case of suspected dengue and malaria, while skin infections and diarrhea have affected hundreds of thousands more, the U.N. said.

Water has receded in some areas, but uncertainty has not.

In Mehmood Kot in southern Punjab, villagers headed back to their homes in tractors and donkey carts. Some picked up clothes and pots from the rubble of houses smashed by the floods.

"I have lost what I saved for my children," said farmer Mohammad Mossa, 65, a father of seven. "Where will I get money for seeds?"