The Greek leader said he understood the reluctance of taxpayers in other EU countries to help his country out of its crisis but said it was not an investment in the mistakes of the past, rather in the success of the future. 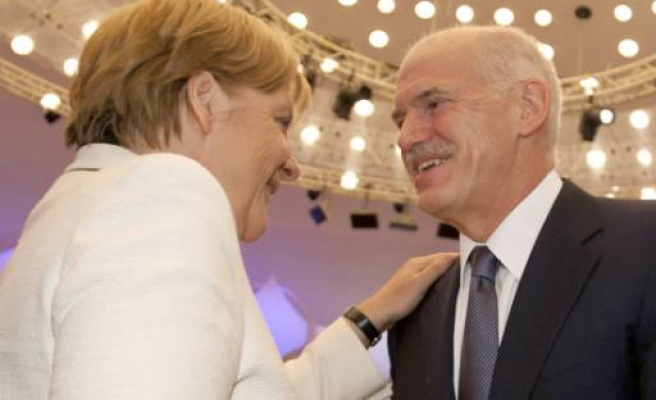 Papandreou, who must implement reforms to receive further aid, will meet Chancellor Angela Merkel to discuss the euro zone debt crisis, two days before a parliamentary vote in Berlin on an expanded bailout fund to prop up weaker members in the bloc.

"I promise you we Greeks will soon fight our way back to growth and prosperity after this period of pain," he said in an address.

The Greek leader said he understood the reluctance of taxpayers in other EU countries to help his country out of its crisis but said it was not an investment in the mistakes of the past, rather in the success of the future.

"The euro zone must now take bold steps toward fiscal integration to stabilise the monetary union. Let's not let allow those who are betting against the euro to succeed," he said.

Merkel, under pressure from voters and some in her centre-right coalition to take a tough line with Greece before Thursday's vote, said Germany would show solidarity with its partners to secure the future of the euro.

"We will provide all the help desired from the German side so that Greece regains trust," Merkel told the conference.

"If the stability of the euro is at stake -- and the experience of the last few years (tells us) that the difficulties of one country endanger our common currency -- then that obliges us to show solidarity within the common currency."

"We will help if the country does all it can in terms of its own homework," she said, also reiterating her opposition to common debt issuance in the euro zone.

A poll earlier this month showed that 76 percent of Germans are opposed to granting any further aid to Greece and top-selling Bild newspaper reflected public hostility to further bailouts by insisting Merkel should be tough on Papandreou.

"This is what you have to tell the Greek Prime Minister to his face, Frau Merkel," wrote the paper, listing demands ranging from making sure taxes were paid to getting rid of the bloated state apparatus and "thinking the unthinkable" -- namely default, a debt restructuring and even leaving the euro zone.

Merkel is battling to convince rebels from within her own party to vote for an enhanced EFSF in parliament on Thursday.

Although the bill will be passed as opposition parties support it, she faces a blow to her authority if she has to rely on their votes. The centre left says Merkel would be finished if she fails to secure a majority from her own ranks.

"Agreement to this fund is of the greatest significance," Merkel said.

Papandreou echoed that sentiment, saying Europe's bailout fund had to be expanded.

"Along with much tighter fiscal oversight, we must expand the EFSF (European Financial Stability Facility) and formulate permanent mechanisms for economic stability and solidarity," Papandreou said.