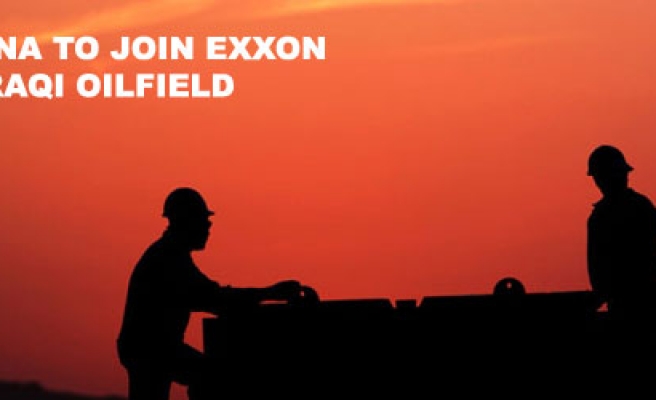 China's biggest energy firm PetroChina will join Exxon Mobil in developing Iraq's giant West Qurna oilfield and is in talks with Lukoil to buy into a second project at the field, industry sources said on Friday.

China is already the top foreign player in Iraq's southern oilfields and a deal at West Qurna would boost its dominance and could make PetroChina the biggest single foreign investor.

"PetroChina will participate in developing the field," an industry source with direct knowledge of the deal with Exxon said.

The agreement would be announced in weeks, the source said, but declined to give further details on how the world's two most valuable listed energy firms would work together in Iraq. Both PetroChina and Exxon declined to comment.

In March, PetroChina's ex-chairman Jiang Jiemin told Reuters that the Chinese energy major was willing to team up with Exxon at West Qurna.

PetroChina is also in talks with Lukoil for a stake in another development project at the field, West Qurna-2, a Lukoil source said. That source also declined to give details on the size of the stake under discussion.

"Lukoil bosses have already said they would prefer an Asian partner, a Chinese partner, in the project to secure a guaranteed market for oil sales," the source said.

Lukoil's Chief Executive Vagit Alekperov has said that the company wanted a Chinese firm to replaceNorway's Statoil at the project. Statoil agreed last year to sell its 18.75 percent stake.

China is the world's second-largest oil importer after the United States, and its growth in fuel consumption has driven global oil demand growth for a decade.

Faced with falling demand for imported oil in the United States and Europe, oil producers from the Middle East, Russia, Africa and Latin America are all competing for a bigger share of China's growing market.

Last year, Exxon offered to sell its stake in the southern Iraq West Qurna-1 oilfield after a dispute withBaghdad over contracts it signed with autonomous Kurdistan in the north, deals the central government rejects as illegal.

A source familiar with PetroChina operations in Iraq said in March the two companies were discussing a deal that would enable Exxon to retain operator status at the oilfield, where Royal Dutch Shell is minority partner with 15 percent.

Some industry sources said it was unlikely that PetroChina would buy stakes in both projects, due to their sheer size and scale.

But Iraq's oilfields are the largest in the Middle East open to foreign investment, making them hard to resist as China's dependency on imports rises.

"PetroChina is under big pressure to add output and reserves for its size," said a second industry official, who has direct knowledge of PetroChina's investment strategy abroad.

"Iraq, given its attractive contract terms, was among the brightest spots for PetroChina's international operations over the past three years, working shoulder by shoulder with global oil majors."

In a separate deal, Exxon and PetroChina agreed in late July to jointly study the 3,830 sqare-kilometre Changdong block in northern China's Ordos basin, the companies said, which industry officials described as a tight gas play.

"Exxon Mobil looks forward to successful implementation of the JSA, which would lead to discussion and execution of a Production Sharing Contract for the block," an Exxon media official in Beijing said in an email on Thursday.

This would be the U.S. firm's second joint study deal with PetroChina. The companies previously agreed to study a shale block in southwestern China's Sichuan province.