Foreign ministers of countries' due to benefit from the The Trans Anatolian Natural Gas Pipeline Project meet in New York. 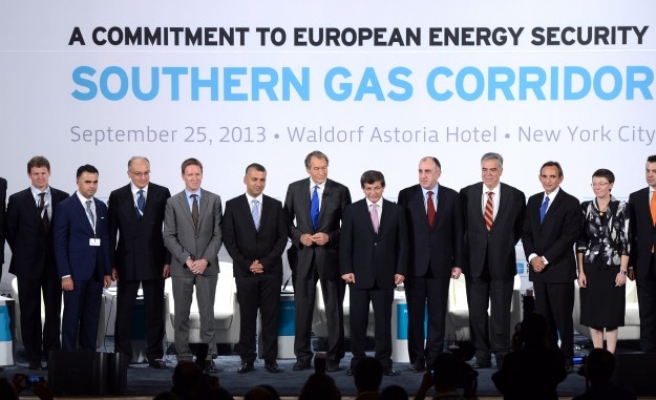 Construction of a huge pipeline bringing natural gas from Azerbaijan through Turkey to Europe due to begin next year, is expected to bring not just economic benefits to the countries involved but will also “contribute to peace and security”, say attendees of forum held in New York Wednesday evening, organised by a think tank which conducts research on Caspian region.

The Trans Anatolian Natural Gas Pipeline Project (TANAP) and the benefits it will bring to the region when it opens, scheduled to be in 2018, was the subject of the gathering attended by Turkish Foreign  Minister Ahmet Davutoglu, and his counterparts from Croatia, Bosnia and Herzegovina, Macedonia, Azerbaijan and Georgia.

Initially proposed by the European Commission in 1994, and signed into agreement in 2012, the TANAP project has been billed as a "revolution in the energy history" of Eurasia. Its goal is to streamline a direct route for Caspian energy resources to the European and Middle Eastern nations, according to the Istanbul-based Caspian Forum.

The pipeline, also dubbed 'the silk road of energy' will help meet Europe's energy needs -  the continent currently imports almost 64 percent of its natural gas and this figure is due to rise to 80 percent by 2030.

"Exploring the diversified energy supply will only make the Balkan region more competitive,"  the Macedonian Foreign Minister Nikola Popovski told AA. He is looking forward to the expected benefits for domestic energy consumers, “my country is not different from any other country in the region when it comes for need of reliable and cheap energy,” he added.

The forum, hosted by US talk show host and journalist Charlie Rose, was attented by energy professionals and experts in the field, there to discuss issues including how the gas from Central Asia should reach consumers in Europe at appropriate market prices.

Praising the leadership of Azerbaijan and Turkey, without whom the project would not have gone ahead, head of the Caspian Strategy Institute, Mr. Haldun Yavas,  added but now  “the dream became reality".

Bosnian Foreign Minister also said that after a meeting on the margins of 68th UN General Assembly session that the Turkish Foreign Minister Ahmet Davutoglu, his Serbian counterpart Ivan Mrkic and himself – this Balkan “troika” have agreed to have a ministerial meeting in Belgrade in December.