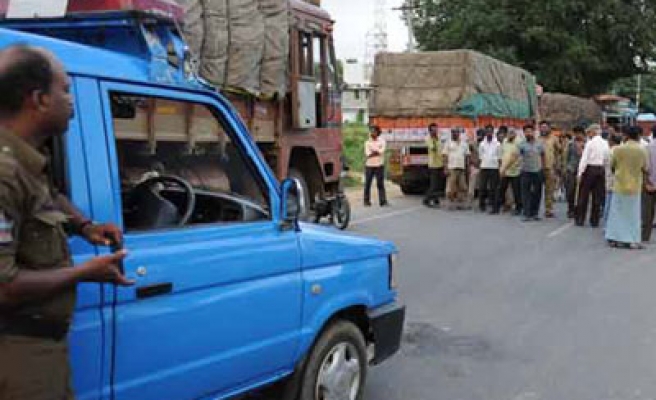 "For the past two days, there have been power cuts of 12 to 14 hours daily," Abhishek Neotia, a businessman based in the coastal town of Visakhapatnam, told Anadolu Agency on Tuesday.

He said the frequent outages had turned normal life upside down.

"The power cuts are badly affecting normal life here. There is [an] acute shortage of water as well. People are forced to store water or go waterless," he asserted.

Most industrial establishments and shops are running on backup power.

The state had originally consisted of three regions: Telengana, Rayalseema and Seemandhra.

Rayalseema and Seemandhra are both bitterly opposed to the move.

"We are not ready to call off our strike unless there is a clear assurance from the central government that it would not divide the state," the Times of India newspaper quoted a strike representative as saying.

The federal cabinet is expected to meet later on Tuesday to discuss the issue.

Speaking to English-language news channel NDTV, Reddy said he would likely resign if the bifurcation of his state was carried out.

The power crisis threatens to engulf other southern states as well, including Tamil Nadu, Karnataka, Kerala and Pondicherry.

Energy officials have asked the Central Electricity Authority (CEA) to intervene to preempt the failure of India's entire southern electricity grid, which would result in a total blackout across the country's southern states.

A CEA official said the authority was closely monitoring the power crisis.

"We have directed to state authorities to make sure that power grid frequency does not drop below 49.5 hertz," the official, insisting on anonymity, told AA.

According to electricity regulations, which are strictly followed by all states, permissible frequency bands for grid options range from 49.5Hz to 50.2Hz.

If the power grid frequency drops below 49.5 hertz, there will likely be grid failure.

India's northern and southern grids tripped up in 2002 because of an overload, and in July 2012 the northern grid collapsed due to excessive power withdrawal by a handful of states.

In AP, however, the issue is neither overload nor excessive withdrawal.

"The issue is that generated power is not moving forward due to the breakdown of transmission lines," the CEA official explained.

At King George Hospital, the only specialized health facility in the Visakhapatnam region, baby incubators were reportedly not working.

"The lack of air conditioners has affected patients with burn injuries and other such ailments," Neotia said.