Putin said construction of the South Stream project could begin at the end of this year and be completed in two years - a tighter timeline than previously envisaged. 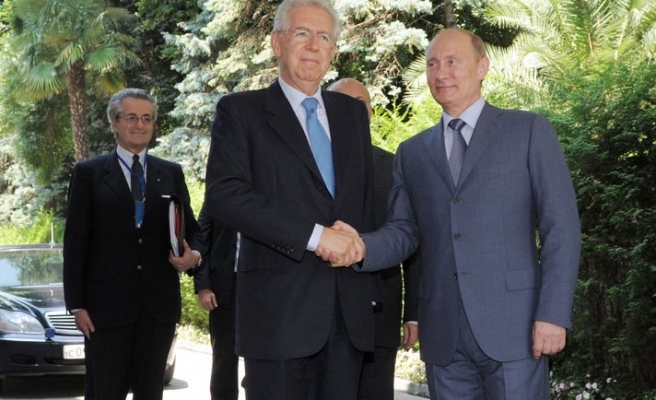 Russian President Vladimir Putin threw his weight on Monday behind plans to build a gas export pipeline to southern Europe, saying the project was still justified despite the continent's deepening economic crisis.

Speaking after talks with Italian Prime Minister Mario Monti, Putin said construction of the South Stream project could begin at the end of this year and be completed in two years - a tighter timeline than previously envisaged.

"This is a common, multi-lateral European project in which the overwhelming majority of our largest gas customers in Europe is interested," Putin told a news conference after meeting Monti at his summer retreat in the Black Sea resort of Sochi.

"I am certain that this project will be realised."

South Stream, a Russian-backed pipeline project to ship gas from the Caspian region, is expected to cost more than 15 billion euros ($18 billion) and export 63 billion cubic metres of gas to southern Europe from 2015.

A final investment decision on South Stream, a rival to an EU-backed pipeline project called Nabucco, is expected in November, with construction to start in December, the Kremlin said ahead of Monti's visit.

"It's already clear to us who will buy, and how much they will buy of the product that will flow through South Stream, along the bed of the Black Sea, to our customers in Western Europe," Putin said.

Project partner Eni of Italy said this month that it expected the final investment decision for South Stream in late 2012 or early 2013.

Speaking alongside Putin, Monti said he considered South Stream to be an important new lever necessary for the EU and for Italy's development.

Russia, which has launched the first line of the 55 bcm/year Nord Stream pipeline across the Baltic Sea to Germany, continues to push export routes for its conventional gas that bypass transit nations like Ukraine.

Energy relations between Moscow and Kiev remain difficult after a pricing dispute resulted in the disruption of supplies to Europe in the winter of 2009, and Ukraine is still pushing for easier pricing terms for its purchases of Russian gas.

The historic link to oil prices in gas export monopoly Gazprom's long-term export contracts has, however, come under pressure from weak European demand and the U.S. shale gas boom, raising questions over the viability of capital-intensive pipeline projects like South Stream and Nabucco.

Although the bilateral talks addressed the euro-zone debt crisis and the deteriorating security situation in Syria, the agenda was energy-heavy and Italian businesses inked a number of deals when Monti met Prime Minister Dmitry Medvedev earlier.

Eni signed an exploration loan facility agreement with state-owned Russian oil major Rosneft. The agreement seals a major offshore exploration partnership that the two companies struck in April for projects in the Barents and Black seas.

Italian bank Intesa Sanpaolo also said it would set up a joint venture with Russia's third-largest lender by assets Gazprombank to jointly invest up to 300 million euros ($365 mln) in Italian and Russian companies seeking international growth.