Rains come too late to revive drought - stricken US crops

The worst drought in more than 50 years through the heart of the summer growing season severely hurt the corn and soybean crops, slashing production and driving prices to record highs. 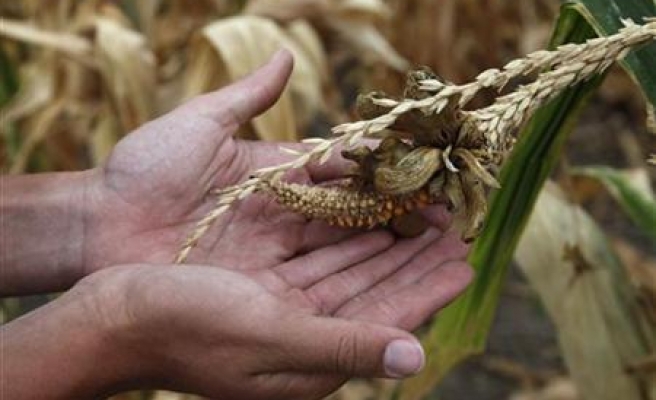 Dry weather will return to the drought-stricken U.S. Midwest crop region, with corn and soybeans ending their growing season on a negative note after this week's rains provedto be too little too late, an agricultural meteorologist said Friday.

"There were some decent rains in central Illinois and west central Indiana yesterday, but it's too late for corn and too late for most of the bean crop," said Don Keeney, meteorologist for MDA EarthSat Weather.

The worst drought in more than 50 years through the heart of the summer growing season severely hurt the corn and soybean crops, slashing production and driving prices to record highs.

Rains now will help some of the later-maturing soybeans, mainly in the Northwest, but showers arrivedtoo late to revive any of the corn crop, Keeney said.

From 1.0 to 1.5 inches of rain fell in the central Midwest on Thursday, with up to 2.5 inches in westcentral Indiana.

There has not been enough rain to end the historic drought, and now it appeared there would be a return to drier weather.

"It looks like a dry weekend and dry next week, there could be some rain in the last week of August," he said.

Cooler temperatures, with highs in the 70s to 80s degrees Fahrenheit, were forecast for most of the Midwest crop region.

The oppressive heat and dryness kept a tight grip on top farm states over the past week. Although there were a few improvements, some areas experienced more serious degradation, according to a weekly report from climate experts released on Thursday.

Rain provided some relief to parched farmland stretching from Iowa through Ohio, but other areas including the Southern and Central Plains remained scorched.

"This week we saw a decline in drought in the lower 48 states for the third week in a row, but the overall decline was small," said Brian Fuchs, a climatologist for the National Drought Mitigation Center at the University of Nebraska.

Fuchs said the weekly Drought Monitor released on Thursday showed a one-in-50-year drought was under way in the United States, and no significant letup was in sight from the devastating impact oncrops and livestock.

The U.S. Department of Agriculture (USDA) already has made deep cuts for this year's corn and soybean output as the drought spread through America's bread basket.

The agency said the 2012 corn crop would fall below 11.0 billion bushels for the first time in six years and the number of bushels yielded per acre was at a 17-year low. Soybean production was forecast at a five-year low and soy yield per acre at nearly a 10-year low.

Analysts and crop experts said additional cuts may be seen in future reports.

USDA will update its crop production data in early September.