Fears of full-fledged Russia-Ukraine war reverberated across emerging markets, with the hardest hit taken by Moscow, where stocks fell 10 percent and the rouble's plunge to record lows 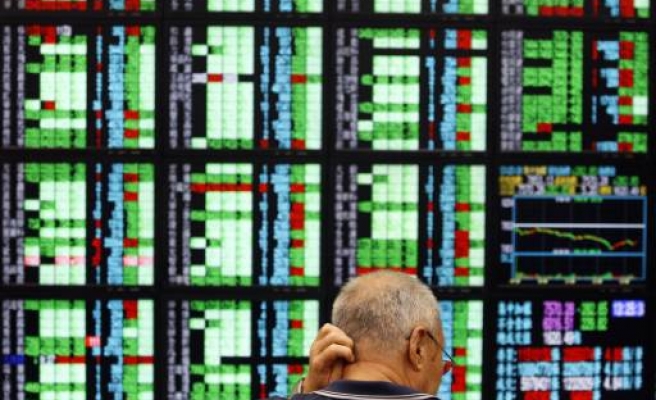 Russia took a financial hit over its military intervention in neighbouring Ukraine, with its markets and currency plunging on Monday as President Vladimir Putin's forces tightened their grip on the Russian-speaking Crimea region.

The Moscow stock market fell by 10 percent and the central bank spent $10 billion of its reserves to prop up the rouble as investors took fright at escalating tensions with the West over the former Soviet republic.

Ukraine said Russia was building up armoured vehicles on its side of a narrow stretch of water closest to Crimea after Putin declared at the weekend he had the right to invade his neighbour to protect Russian interests and citizens.

On the ground in Perevalnoye, half way between the Crimean capital of Simferopol and the Black Sea, hundreds of Russian troops in trucks and armoured vehicles - without national insignia on their uniforms - surrounded two military compounds, confining Ukrainian soldiers as virtual prisoners.

Ukraine called up reservists on Sunday and the United States threatened to isolate Russia economically after Putin's action provoked what Britain's foreign minister called "the biggest crisis in Europe in the twenty-first century".

European Union foreign ministers were to hold emergency talks on Ukraine on Monday but diplomats said they would not immediately match U.S. threats of sanctions against Moscow, but would focus on diplomatic efforts to prevent escalation.

The Organisation for Security and Cooperation in Europe (OSCE) said it was trying to convene an international contact group to help defuse the crisis after Germany said Chancellor Angela Merkel had convinced Putin to accept such an initiative.

Switzerland, which chairs the pan-European security body, said the contact group would support Ukraine during its transition and coordinate aid and could also discuss sending observers to monitor the rights of national minorities.

The Russian central bank raised its key lending rate by 1.5 percentage points after the rouble fell to all-time lows against the dollar. The MICEX index of Moscow stocks tumbled 10 percent to 1,294 points. Russian gas monopoly Gazprom , which supplies Europe through Ukraine, was down more than 13 percent.

Gazprom's finance chief warned Ukraine that it may hike gas prices from next month, accusing Kiev of a patchy payments record, but said gas transit to Europe was normal.

Ukraine's Prime Minister Arseny Yatseniuk, head of a pro-Western government that took power when former president Viktor Yanukovich, a Russian ally, fled on Feb. 21 after three months of street protests against his rule, said Putin had effectively declared war on his country.

Western leaders have reacted with a barrage of warnings to Putin against armed action, threatening economic and diplomatic consequences if Moscow goes further, but are not considering any military response.

A Ukrainian border guard spokesman said on Monday that Russian ships had been moving in and around the Crimean port city of Sevastopol, where the Russian Black Sea Fleet has a base, and that Russian forces had blocked mobile telephone services in some parts of Crimea.

He said Moscow was building up its armour near a ferry port on Russia's side of the 4.5 km (three mile) wide Kerch straight, which separates Crimea from Russia.

There was no immediate comment from the Russian Defence Ministry.

Russian forces have already bloodlessly seized Crimea - an isolated Black Sea peninsula with an ethnic Russian majority, where Moscow has a naval base.

On Sunday they surrounded several small Ukrainian military outposts there and demanded the Ukrainian troops disarm. Some refused, leading to stand-offs, although no shots were fired.

All eyes are now on whether Russia makes a military move in predominantly Russian-speaking eastern Ukraine, where pro-Moscow demonstrators have marched and raised Russian flags over public buildings in several cities in the last two days.

Russia has staged war games with 150,000 troops along the land border, but so far they have not crossed. Kiev says Moscow is orchestrating the protests to justify a wider invasion.

Ukraine's security council ordered the general staff to immediately put all armed forces on highest alert. However, Kiev's small and underequipped military is seen as no match for Russia's superpower might.

U.S. Secretary of State John Kerry condemned Russia for what he called an "incredible act of aggression" and threatened "very serious repercussions".

G8 countries and other nations were prepared to "to go to the hilt to isolate Russia" if Moscow made the wrong choices in Ukraine, Kerry told CBS programme Face the Nation.

"They are prepared to isolate Russia economically. The rouble is already going down. Russia has major economic challenges," he said. He mentioned visa bans, asset freezes and trade isolation as possible steps.

While the EU and NATO stepped up verbal pressure on Moscow, a German spokesman said Merkel believed it was not too late to resolve the Ukrainian crisis by political means despite differences of opinion between Putin and the West.

The German leader, who speaks fluent Russian, has had several long telephone calls with the German-speaking Putin since the crisis erupted with mass protests in Kiev.

"There is no doubt President Putin has a completely different view on the situation and events in Crimea from the German government and our Western partners," spokesman Steffen Seibert told reporters. But he added: "It is still not too late to resolve this crisis peacefully by political means."

U.N. Secretary-General Ban Ki-moon said he would ask Russia's foreign minister at a meeting in Geneva to refrain from acts or rhetoric that would further escalate the crisis. He was sending his deputy to convey the same message to the Ukrainian authorities in Kiev, he said.

So far, the Western response has been largely symbolic. Obama and others suspended preparations for a G8 summit in Sochi, where Putin has just finished staging his $50 billion winter Olympic games. Some countries recalled ambassadors. Britain said its ministers would stay away from the Paralympics due next in Sochi.

With the confrontation in Crimea having remained bloodless for days, a mood of imminent catastrophe has begun to ebb in Kiev, but many people are still on edge.

On Kiev's Independence Square, known as the Maidan, where protesters manned barricades for three months to bring down Yanukovich, the morning crowds were smaller than in the past few days as people returned to work.

"Crimea, we are with you!" read one placard. "Putin - Hitler of the 21st century," read another.

Sergei Lavreynenko, 44, a librarian from Kiev, said Ukrainians were ready to take up arms to defend the country, and were frustrated at mixed messages from the authorities.

"Of course we are all ready to go," he said next to a display of homemade mortar tubes and molotov cocktails used in the uprising against Yanukovich. "We have all served in the military. We have military specialisms. If we can build our own mortar tube like that, we can do even better.... But it needs to be organised. You can't just get a bunch of guys, grab sticks and clubs and race off to Crimea."

Britain's International Institute of Strategic Studies estimates Kiev has fewer than 130,000 troops under arms, with planes barely ready to fly and few spare parts for a single submarine.

Russia, by contrast, has spent billions under Putin to upgrade and modernise the capabilities of forces that were dilapidated after the breakup of the Soviet Union. Moscow's special units are now seen as equals of the best in the world.