Russia's finance minister said Moscow would buy $2 billion of Ukrainian eurobonds by the end of this week, in addition to the $3 billion it bought in late December. 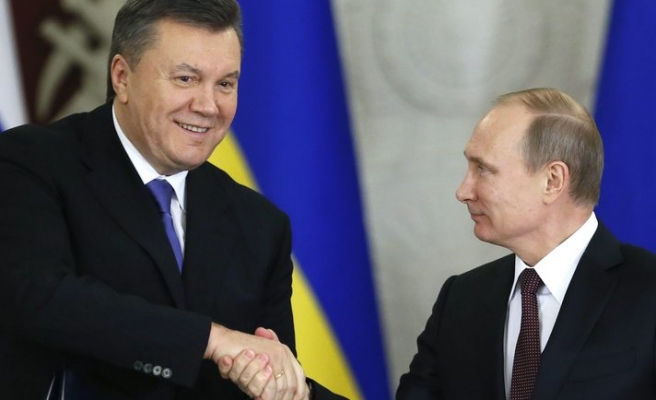 Russia said on Monday it would give Ukraine a fresh cash injection of $2 billion to support its heavily indebted economy in a boost to the embattled president in Kiev, who has been forced onto the back foot by 12 weeks of unrest.

Viktor Yanukovich is contending with an opposition-led street revolt after he walked away from a trade pact with the European Union in November and opted instead for forging closer economic ties withRussia, Ukraine's former Soviet master.

With the opposition, backed by the United States and its EU allies, pressing hard for Yanukovich to allow the formation of an independent government, the Kremlin had hinted strongly that a $15-billion lifeline would be frozen unless he produced a new government acceptable to Moscow to replace the prime minister who was removed three weeks ago to appease the protesters.

But ahead of a parliament session in Kiev, when prospects for a new government are to be discussed, Russia's finance minister, Anton Siluanov, said Moscow would buy $2 billion of Ukrainian eurobonds by the end of this week, in addition to the $3 billion it bought in late December.

A Ukrainian government source said it expected the money from Russia to arrive on Wednesday.

November's revolt, sparked by the U-turn on the EU pact, has spiralled into countrywide protests at perceived sleaze and corruption in the Yanukovich administration, and has triggered a tussle between East and West in which Yanukovich has had to ponder his future strategic alliances.

As Russia beckons with the aid package - a quick fix to plug holes in Ukraine's indebted economy - theUnited States and its Western allies have urged Yanukovich to move back towards an IMF-backed deal with Europe.

Russia's commitment to continue to drip-feed its aid package to Ukraine, as announced by Siluanov, appeared to strengthen Yanukovich's hand as he ponders a replacement for Russian-born premierMykola Azarov, who resigned on Jan. 28.

But if he resists opposition calls for constitutional change and names another hardliner - perhaps more suitable to Moscow - the streets could return to uproar.

Opposition leaders on Monday pressed Yanukovich again to accept curbs on his powers and let them form an independent government to end the unrest and rescue the economy.

An amnesty for activists took effect on Monday after protesters ended their occupation of Kiev's city halland municipal buildings elsewhere.

But tension remained high with the opposition accusing Yanukovich and his allies of delaying discussion that could lead to his relinquishing what they call "dictatorial" powers.

They suspect him of trying to slow down the momentum of the protest movement. But with foreign currency reserves depleted by repeated moves to prop up the weak hryvnia and fears of a devaluation growing by the day, Yanukovich is increasingly under pressure to name a new prime minister.

"People want a complete rebooting of the system, that's the main thing," said boxer-turned-politician Vitaly Klitschko, one of three opposition leaders who are pressing for a return to an old constitution that would remove presidential control of the government and the judiciary.

"We are being told that this constitution can only be drawn up by September. But we are in a critical situation when people are demanding to be heard immediately," he said on Monday at a meeting of parliamentary factions.

Klitschko and former economy minister Arseny Yatsenyuk later met German Chancellor Angela Merkel inBerlin, where the opposition leaders called for economic help from the EU - but not aid that could bolster Yanukovich.

The amnesty came into force after scores of protesters, including a masked and club-wielding "self-defence' militia numbering about 100, ended a two-month occupation of city hall.

The amnesty, applauded by the European Union and the OSCE rights body, means that criminal charges will be dropped against protesters for offences between Dec. 27 and Feb. 2.

That period includes a week of clashes in January involving radical activists in which six people were killed and hundreds of police and protesters injured.

Despite the conciliatory moves, the mood on the Maidan, the local name for Kiev's Independence Squarewhich is the focal point of the protests, remained truculent on Monday.

"I can't see that anything much has changed - people still want the leadership to go," said Viktor Stelmakh, 45, from the Zhytomyr region west of Kiev. "Parliament has got to understand that everything has to be changed - the constitution, the laws, the president and even the parliament.

"I don't want today's Yanukovich to be simply replaced by another new Yanukovich."

At Kiev's main flashpoint near Dynamo football stadium, where three activists were killed in January in clashes with riot police, masked men manned barricades of tyres and sandbags across one end of the road leading to government offices despite a partial passage for traffic being cleared on Sunday.

Western governments have expressed fears of an escalation of conflict and breakdown of law and order unless Yanukovich meets opposition demands.

The hryvnia weakened only slightly on Monday after an overall slide in value of 7 percent since the beginning of the year, but prospects of a serious depreciation in its value sometime in the future appeared more and more likely.

"The basic factor weighing on the hryvnia today is the absence of trust," said Glib Vyshlynsky of market research company GfK. "And without the political crisis being solved it is difficult to assume there will be a growth of trust."