Russia and China took a step toward a closer energy relationship on Monday as they prepared to open a pipeline that will bring Siberian crude oil to China. 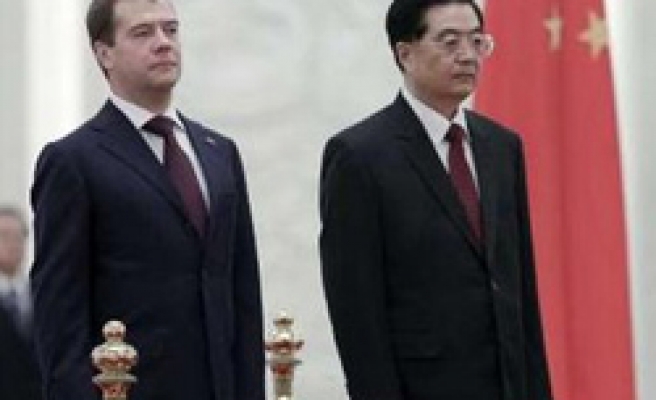 Russia and China took a step toward a closer energy relationship on Monday as they prepared to open a pipeline that will bring Siberian crude oil to China.

Russia is rich in energy resources but burdened with pipelines that lead west -- despite European fears of Russian dominance, Russian officials have often complained the country is a hostage to Europe's willingness to keep buying.

A branch of the new East Siberian-Pacific Ocean (ESPO) pipeline is set to start bringing 300,000 barrels per day across the border on Jan. 1, 2011, giving Russia a new oil export route.

Russian President Dmitry Medvedev and his Chinese counterpart Hu Jintao attended a ceremony to mark the completion of the Chinese branch of the pipeline on Monday.

China will start testing its section at the end of October and Russia will begin test-pumping about 600,000 tonnes of oil in November or December, according to Chinese and Russian officials.

The Chinese branch is a spur of a larger pipeline that will eventually send oil to Russia's Pacific coast, a design long seen as an attempt by Russia, the world's largest oil exporter, to counterbalance China with other buyers, such as Japan, as a market for its energy in the east.

Medvedev did not clinch a deal on gas pricing, however, the vital element that would allow the world's top gas exporter to sell to the fast-growing Chinese market.

The development of vast Russian fields in east Siberia over the past decade, partly financed by China, has allowed Russia to create a northeast Asian oil-trading hub that connects it to the world's three largest consumers -- the U.S., China and Japan.

"The future is Asia, that is really where the growth is and that is why (Russian Prime Minister Vladimir) Putin emphasises the importance of this project," Eurasia Group oil analyst Greg Priddy said.

Beijing and Moscow have settled the border disagreements that long plagued their relations and almost sparked a war in 1969.

Now Russia and China are trying to put flesh on the bones of mutual promises to expand cooperation in trade, energy and regional security.

They were only partly successful on Monday, and repeated a past pattern of talking up hopes while falling short on many specifics.

"Practically, there are no limits for the growth of gas consumption in China," said Sechin, who is chairman of Russian oil giant Rosneft and oversees the country's energy and metals industries. "Secondly, Russia has all the gas needed for China's economic development."

"All elements of partnership are being considered: infrastructure, routes, deposits, shipments and cooperation in the financial sphere."

China also contracted Russia's Atomstroiexport to build two more reactors at the Tianwan nuclear power plant, one of a score of facilities being built or expanded in China's rapid shift into alternative energy.

China is planning to double the share of gas in its energy mix over the next decade as part of a wider drive to wean its booming economy off coal, the cheapest but dirtiest fossil fuel.

Russia, which has the world's biggest gas reserves, is keen to diversify its exports away from Europe by building pipelines and selling gas overseas in the form of liquefied natural gas.

But the failure to reach an agreement on pricing has stymied progress, despite the huge potential of Russian supply and Chinese demand.

And in the intervening four years, China has rapidly locked in competing supplies -- piping it from Central Asia, importing LNG and investing in new ways of finding it on its own territory.

Domestic gas production has almost doubled to around 7.5 bcm per month and next year China will get 17 bcm via a pipeline linking Turkmenistan, Uzbekistan, Kazakhstan and China, which is even longer than the planned ESPO pipeline.