More than two months after the annexation, Moscow needs to secure Crimea's basic needs - chief among them, the water and power almost entirely supplied from Ukraine - in order to prop up the local economy and sustain its popularity 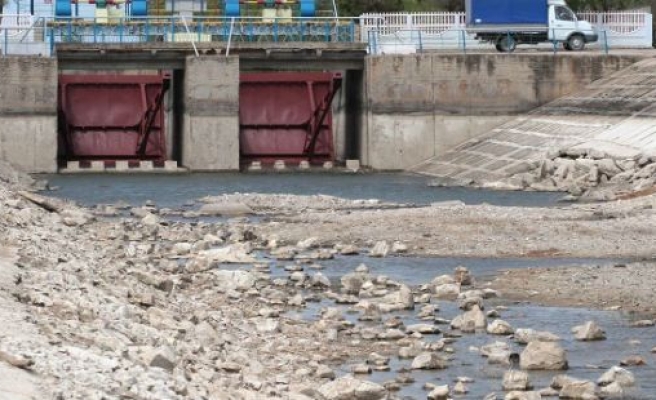 Scrambling to compensate for a lack of water from mainland Ukraine, farmhands are laying row after row of pipe to drip water across dusty fields in Crimea's arid north.

The water shortage highlights the huge logistical hurdles Russia faces to wean Crimea off dependence on Ukraine, from which it seized the Black Sea peninsula in March.

More than two months after the annexation, denounced as illegal by Kiev and the West, Moscow needs to secure Crimea's basic needs - chief among them, the water and power almost entirely supplied from Ukraine - in order to prop up the local economy and sustain its popularity among its 2 million people.

"We've drilled wells, we're using drip irrigation, but there's still not enough water," said Vasily, a burly man whose 50-hectare (124-acre) vegetable farm near Dzhankoi has been irrigated by water from the Dnieper river diverted along a canal across a strip of land that links Crimea to the mainland.

He and other farmers have planted less thirsty crops since, they say, Ukraine reduced flows across its new de facto border with Russian-controlled Crimea - a move Russian Prime Minister Dmitry Medvedev decried as political retribution. Ukrainian officials say water is still flowing but will not say how much.

The stakes are high for Moscow, which has said it could spend up to $7 billion this year alone to integrate Crimea's economy with Russia and nurse a euphoric pro-Kremlin mood that saw the majority ethnic Russian population of the peninsula vote for annexation in March.

"People are optimistic about the future but ... the Russian leadership understands perfectly well that if the Crimean economy stagnates, the responsibility will fall on Russia's shoulders," said Yuri Korban, director of one of the many vineyards that dot Crimea's jagged coastline.

Russia's economy is already teetering on the brink of recession amid Western sanctions imposed over the annexation of Crimea, which was completed within a month of the ousting of a Moscow-backed president in Kiev and followed a military takeover supported by troops from Russian bases on the peninsula.

Going by the experience of the much smaller Georgian region of South Ossetia, over which Russia gained effective control after a 2008 war with Georgia, the process of integrating Crimea is likely to be both lengthy and very costly.

Ukraine seems unlikely to cut Crimea off abruptly from supplies. But its grip on some 80 percent of the region's fresh water and up to 90 percent of its electricity is one of the few levers Kiev has in its dealings with Moscow as the new Ukrainian president tries to end another Crimea-style revolt in the east.

Russia knows it needs years and billions of dollars to lay connections across the 4-km (2.5-mile) strait dividing its own mainland from Crimea's easternmost point. It wants talks with Ukrainian President Petro Poroshenko to keep the border open.

"The political process in Ukraine will probably move forward now, and then we'll hold negotiations," said Dmitry Kozak, a deputy to Medvedev who joined the premier on a symbolic visit to Crimea on May 25, the very day Poroshenko was elected.

For now, though, talks look some way off.

Ukraine says Crimea's regional authorities owe it 1.7 million hryvnias ($140,000) for last year's water and have no plan for how they will pay. "We do not even have an official organisation with which we can discuss these agreements," a spokeswoman for Ukraine's state water agency said.

A Ukrainian government source said Ukraine is still supplying water through the canal but would not say how much, while Crimean officials say they are drilling dozens of wells and rerouting fresh water from reservoirs to cope.

Although food deliveries from Ukraine, by road and rail, have not been severely interrupted, Crimean officials have put restrictions on sending sugar, flour, meat and other foodstuffs to the mainland to ensure the region does not run low on food.

Russia's Energy Ministry, meanwhile, says there are plans to spend around $2 billion upgrading Crimea's power stations and linking the peninsula to the Russian electricity grid.

Ukraine currently supplies the peninsula with between 60 percent and 90 percent of its power, depending on weather conditions, as Crimea's limited generating capacity comes mainly from solar- and wind-powered installations.

Crimea is largely self-sufficient in natural gas. And its annexation has given Russia access to offshore fields thought to hold the equivalent of 2.3 trillion cubic metres of gas - enough to meet European gas demand for around 5 years.

Kiev must carry out a delicate balancing act in its response to Russia's seizure of Crimea, a territory bureaucratically transferred to Ukraine by Soviet leaders in the 1950s and which Poroshenko now views as "occupied."

Even though Ukraine could halt supplies to the peninsula to punish Moscow indirectly, it is itself heavily dependent on Russia for natural gas and is locked in talks brokered by the European Union to negotiate a lower gas price.

Ukraine's leaders also risk angering compatriots stranded in Crimea - and their own allies in the West - should they try to use supplies as a weapon. The fragile Ukrainian economy will, however, benefit from not having to cover Crimea's yearly budget deficit of over $1 billion or to replace ageing infrastructure.

For Moscow, the burden of propping up Crimea, whose $5 billion economy will account for less than 1 percent of Russian gross domestic product, could not come at a worse time.

Russia's economy contracted 0.5 percent in the first quarter as investment slumped and capital flight soared to $63 billion in anticipation of sanctions by the United States and European Union over the Ukraine crisis.

Although the sanctions turned out to be less painful than feared - mostly visa bans and asset freezes - and markets have recovered somewhat, Russia's oil- and gas-dependent budget will be especially stretched this year due to weaker revenues.

Analysts warn the political will for the large-scale investments Moscow has promised in Crimea could fade if Russian economic growth slows yet further.

"Crimea is an investment dead end: the ports are old, the railways and roads haven't been fixed for ages," said Alexei Bezborodov, director of the Moscow-based InfraNews consultancy.

Despite similarly generous promises to South Ossetia, the economy of the region, whose population is barely a fiftieth of Crimea's, is now almost wholly dependent on funds from Moscow.

Noting Crimea's much greater size, Varvara Pakhomenko, a Moscow-based researcher with the International Crisis Group, said the headache it presents would also be much greater:

"Much higher investment is needed today but there's less money in the coffers," she said. "Russia will try to solve Crimea's problems, above all the infrastructure ones.

"But it will be very expensive, and take time."