Russia, grappling with its worst drought on record, warned that its ban on grain exports could extend into 2011. 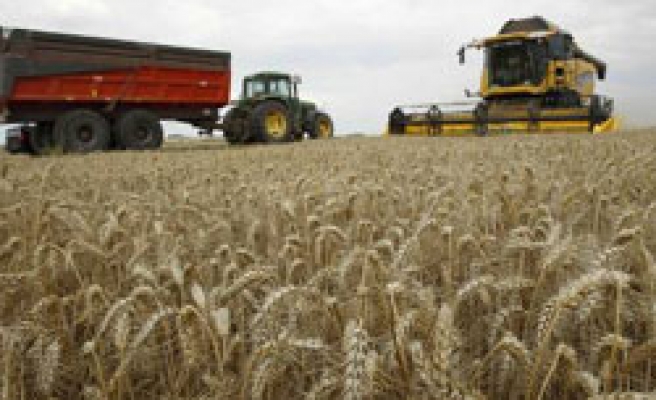 Russia, grappling with its worst drought on record, warned on Monday that its ban on grain exports could extend into 2011 and that the intense heat threatened to stall seeding for next year's harvest.

Effects of the drought that has decimated supply from the world's No. 3 wheat exporter have reverberated across the globe, sending prices of wheat to their highest level in about two years despite comfortable global supply levels.

Major suppliers canceled deals to ship as much as 200,000 tonnes of Black Sea wheat to Bangladesh after Russia said last week it would ban grain exports from Aug. 15 to Dec. 31. Dealers expect more such cancellations to follow, forcing importers to seek supplies from other countries.

On Monday, Russian Prime Minister Vladimir Putin said the ban could extend beyond 2010 and noted that grain production could drop to 60 million tonnes, below the latest forecast from the country's agriculture ministry of 65 million.

"If someone is waiting for Dec. 31, he is waiting in vain. A decision may be taken only after the harvesting campaign results are clear," he told a government meeting.

He also said key grain growing regions in Russia were unable, and will not be able, to begin winter seeding. The winter wheat crop is usually harvested the following summer.

The news from Putin helped to lift wheat prices in Europe, which fell sharply at the open as did prices at the Chicago Board of Trade on follow-through selling from Friday.

The intense heat and smoke have nearly doubled death rates in Moscow, a city official said on Monday, as a shroud of smog from the raging forest and peat fires beset Russia's capital for a third week.

Analysts SovEcon estimated on Monday that Russia's wheat crop could fall by nearly a third to 43.5 million tonnes and that the export ban was likely to be extended into 2011.

The crop estimate was well below the consensus in a Reuters snap poll on Aug. 5 of 46.5 million tonnes.

SovEcon forecast Russia's wheat exports in 2010/11 may be around 3 million tonnes, plunging from the 18 million tonnes the International Grains Council estimated were shipped in 2009/10 when it was the world's number three exporter.

"The ban (on grain exports) will most likely be extended into the new year," SovEcon said, adding an expected decline in barley production would increase the demand for wheat to produce animal feed in the regions hit by drought.

In neighbouring Ukraine, the world's sixth-largest wheat exporter in the 2009/10 season, analysts and officials cut crop and export forecasts.

"Wheat yields are lower than we expected before because of the very hot weather," Elizaveta Malysh from UkrAgroConsult told Reuters.

A senior Ukrainian Farm Ministry official said this year's wheat harvest could fall to about 17 million tonnes, below the consensus in a Reuters poll last week of 18.1 million and down from 20.9 million in 2009.

"There is widespread belief in the market that Ukraine is undertaking some deniable form of export slowdown," a trader said.

Egypt, the world's largest wheat importer, had signed contracts for 540,000 tonnes of wheat from Russia for delivery between Aug. 1 and Sept. 10.

GASC, in its tender set on Friday, did not seek offers of wheat from Russia, Ukraine and Kazakhstan as it has in the past. On Saturday, it bought 240,000 tonnes of French wheat.

Russia is a net importer of sugar, although it has bought less in recent years as increased domestic production and variable import tariffs pushed it down to the world's number three sugar buyer from the top spot.

Russia set its previous beet sugar refining record in 2008, when it refined 3.5 million tonnes from that year's harvest. The crop declined to 3.2 million tonnes in 2009 as farmers cut the area sown to sugar beets.