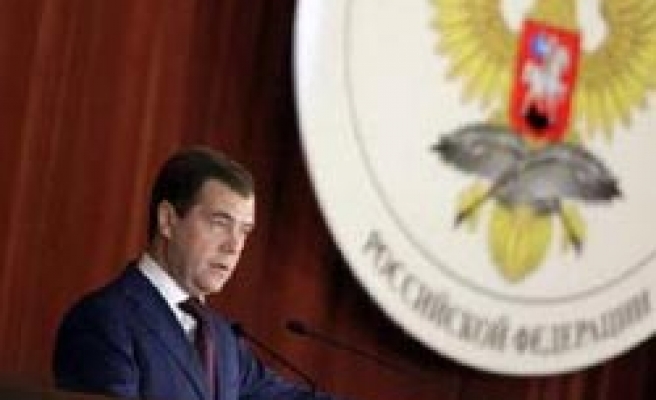 Russia's leaders are worried that recent price rises for staples such as flour, buckwheat, pasta and meat following the worst drought in at least a century could undermine the Kremlin's support ahead of the 2012 presidential election.

Russia's summer drought will lead to a "price shock" for three to six months though inflation should be 7.0 percent for the year, central bank first deputy chairman, Alexei Ulyukayev, told a banking conference.

Medvedev, speaking to a state council of senior government and regional officials, complained that speculators were driving up prices for certain foods such as buckwheat -- a Russian staple for centuries.

"The speculators need to be caught," Medvedev said at the meeting in Saratov, a city on the Volga river in an agricultural region hit by the drought. "There are no objective reasons for the current changes in price" for food products.

"The situation should be kept under control by the government and regional leaders... If the situation changes I will take the decision to ensure our citizens have quality and affordable food... This is a priority for the state."

Russia's grain harvest is expected to fall to 60-65 million tonnes this year after what the state weather agency says is Russia's worst drought in over a century from 97 million tonnes harvested in 2009.

Medvedev said Russia, which was the world's third largest wheat exporter before this year's poor harvest, would seek to regain its position on world markets.

"In recent years we returned Russia the status of a leading world exporter of grain and we shall move forward," he said. "Despite the unusual heat, despite the drought, our country has enough reserves of grain."

Agriculture Minister Yelena Skrynnik set an ambitious target to increase the harvest to 85-90 million tonnes of grain in 2011. Medvedev said there was enough grain with carryover stocks of some 21-25 million tonnes.

Hot weather is expected in the southern part of European Russia, the country's main breadbasket, on Sept. 2-4, with sporadic rains, the country's weather forecasting service said on Thursday.

Russia, which usually enjoys seasonal, harvest-time deflation in late summer and early autumn, has this year seen prices surge as people stock up on staples after the drought killed off around a third of the grain crop.

Medvedev has toured villages, dairy farms and meat processing plants in recent days in an effort to reassure Russians, who still remember the empty shelves and soaring food prices leading up to and following the 1991 collapse of the Soviet Union.

The Kremlin chief said he was particularly concerned about the price of buckwheat, which millions of ordinary Russians like to eat as porridge or with mushrooms and onions.

"People are buying up this buckwheat from big retailers in the evenings, using sacks to fill up their trucks, and then selling it in small shops and markets," Medvedev said.

"Those who are involved in hiking up prices, those involved in earning unjustified profits, should be dealt with by prosecutors, by the police, by the anti-monopoly and tariff services," he added.

The poor harvest in the republics of the former Soviet Union has send world prices for grains soaring as some governments such as those in Russia and Ukraine stopped or curbed exports.

But Ukraine's wheat exports rose to 430,000 tonnes in August from 225,000 tonnes in July despite informal export limits introduced by the Ukrainian Customs Service, analyst UkrAgroConsult said on Thursday.