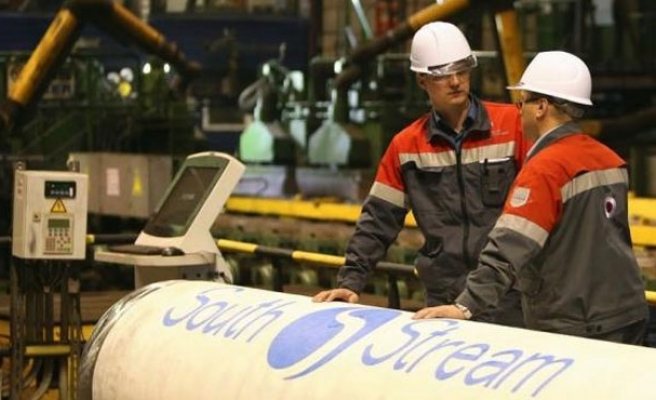 Sberbank, Russia's largest bank, wants to finance the new natural gas pipeline planned to pass through Turkey, according to the bank's senior official on Thursday.

Sergey Gorkov, deputy chairman of Sberbank speaking at the World Economic Forum in Davos said that the project which started in December will have two more years of work to realize the project.

In early December, Russia scrapped the South Stream project, which was planned to carry gas under the western part of the Black Sea to Bulgaria and further into European markets.

Russian President Vladimir Putin offered a new gas pipeline route via the Black Sea to reach Turkey's northwestern Thrace region. Additionally, a gas hub to be constructed at the Turkish-Greek border is planned to transfer gas further into Europe.

Gorkov in an interview with The Anadolu Agency said that Sberbank has already financed many major projects in Turkey including Istanbul's third airport and Turkey's first nuclear power plant, the Akkuyu Nuclear Power Plant. He added that the bank will negotiate with the relevant parties for the new natural gas pipeline project.

"We haven't made a final decision yet. Gazprom is one of our customers. We are ready to negotiate." Gorkov said.

Russia's state-owned energy giant Gazprom supplies almost 60 percent of Turkey's natural gas demand through the Blue Stream and Western Pipeline. The newly-named "Turkish Stream" means a lot for European Union's energy security as it is very important for Turkey to be an energy hub.

Gazprom's Chief Alexei Miller warned the EU on Jan. 14 in a press conference that the Turkish Stream is the only way of obtaining 63 billion cubic meters of Russian gas.

Gorkov underlined that Sberbank has financed many Turkish firms' projects in Russia and he said that there is a huge opportunity for big scale growth in Russia for Turkish companies.

"The commodity prices in Russia are now very low. Many Turkish firms know the Russian market very well and have business partners there," Gorkov said, and added that he has met many business people in Davos who have very viable projects for the Russian market.

In response to the possibility of the bank offering its state-owned shares publicly, he said, "I don't think it is the right time to sell shares especially when the ruble's value is falling."

Gorkov also underlined that their subsidiary in Turkey's Denizbank won the "World's Most Innovative Bank" prize in November 2014 which was received from the leading worldwide professional financial institution, the Bank Administration Institute.

"Since we bought Denizbank, we have raised our assets very much in two years." he said and added that the bank does not have any future plans for Denizbank's public offering.

"Turkey is the golden island between Europe and the Middle East," he said.

Gorkov said that they haven't seen the critical outcomes of Western sanctions yet, but in 2015 they expect to see negative effects on Russia.

"While there was positive growth last year, we foresee a recession in the economy this year, but oil prices will determine the course of the economy in Russia," Gorkov said.