South Africa's largest union warned of bringing mining and other industries to a halt next week in a strike to support labour action by 1.3 million state workers. 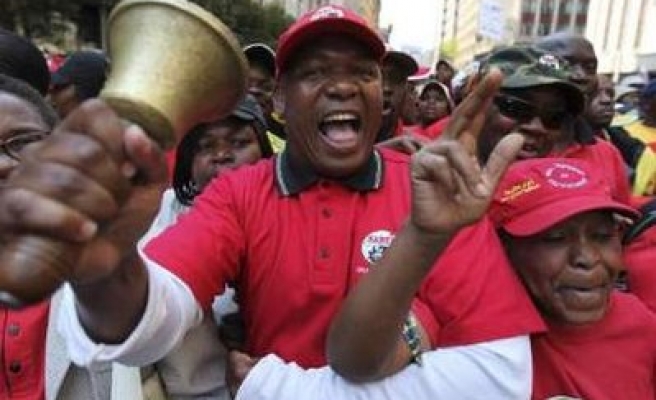 South Africa's largest union on Friday warned of bringing mining and other industries to a halt next week in a strike to support labour action by 1.3 million state workers.

Government spokesman Themba Maseko would not comment on the reports. Officials at two state workers' unions in the coalition of more than a dozen groups on strike discounted the reports and said there had been no new negotiations.

The National Union of Mineworkers said its members would launch a solidarity strike next Thursday that could deal a blow to the country's mining sector, which is responsible for about 5 to 6 percent of South Africa's gross domestic product.

NUM is the biggest union in the country's largest labour federation COSATU, which says it has 2 million members and on Thursday filed seven-day strike notices that would allow members in affiliated unions to strike..

Thousands of municipal workers were expected to defy a court order and stage a one-day sympathy strike on Friday that could halt garbage collection in major cities.

The NUM said on Friday some workers at a Rio Tinto-BHP Billiton titanium joint venture had also downed tools in a dispute over wages.

The government has said it cannot afford the state workers' demand of an 8.6 percent wage rise, more than double the inflation rate, and 1,000 rand ($137) a month as a housing allowance. It has offered 7 percent and 700 rand.

Spending on personnel is the biggest category of state expenditure, taking up about a third of the budget. In 2006/07, about 35 percent of tax revenue went to paying state employees and that rose to about 46 percent in 2009/10, which means any wage deal could lead to increased taxes.

Jasson Urbach, an economist with the Free Market Foundation, estimated the work stoppage was costing the economy about $148 million a day.

An expanded strike would add to worries about prospects for growth after the economy slowed more than expected in the second quarter of 2010 as mining contracted and manufacturing expanded at a slower pace.

Pressure is mounting on the government to reach a deal before it deals a significant blow to Africa's largest economy, which might also help it mend ties with COSATU, which has said their decades-long alliance was in jeopardy of rupture.

The unions are under the gun to reach a deal with public opinion turning against them after strikers harassed students trying to go to school and blocked the sick from seeking medical care, which health officials said led to several deaths.