Union leaders were meeting with management in Johannesburg for talks and the union planned another rally on Tuesday. 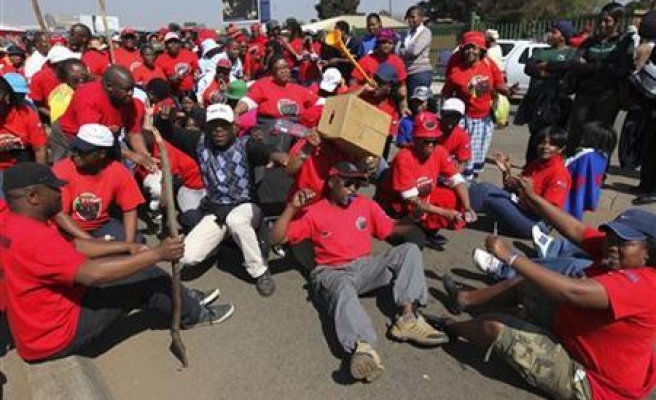 Around 2,000 striking South African miners from Anglo American Platinum rallied on Monday to protest planned job cuts at the world's top producer of the precious metal.

Now in its fourth day, the strike at Amplats has hit production at the mining company, which is still reeling from labour unrest last year and has said it needs to drastically cut jobs to return to profit.

Amplats wants to cut about 4,800 jobs. It originally aimed to eliminate as many as 14,000, but scaled back its plans after fierce criticism from the government and unions.

Police in armoured vehicles looked on as miners marched and waved sticks in a barren field near the company's Thembelani Mine near the mining town of Rustenburg, northwest of Johannesburg.

Union leaders were meeting with management at 1400 (1200 GMT) in Johannesburg for talks and the union planned another rally on Tuesday, officials for the hardline Association of Mineworkers and Construction Union (AMCU) said.

"If they do not meet us at least half way, the strike will continue," Thebe Maswabi, an AMCU branch chairman, told Reuters.

A solution does not look easy. Amplats' return to profitability hinges on an overhaul of its Rustenburgmines, where it plans to drastically cut back production.

But jobs are a sensitive issue in South Africa, where four in 10 adults are without work and the ruling African National Congress faces elections next year.

AMCU has emerged as the dominant union on the platinum belt after poaching tens of thousands of members last year from the ANC-allied National Union of Mineworkers in a bloody turf war.

The current AMCU-led strike is legal and has so far been peaceful although NUM has said its members - who are not on strike - have been intimidated into staying away.