The strike for higher wages has slowed the treatment of the sick and shut schools across South Africa, adding pressure on the government to reach a deal. 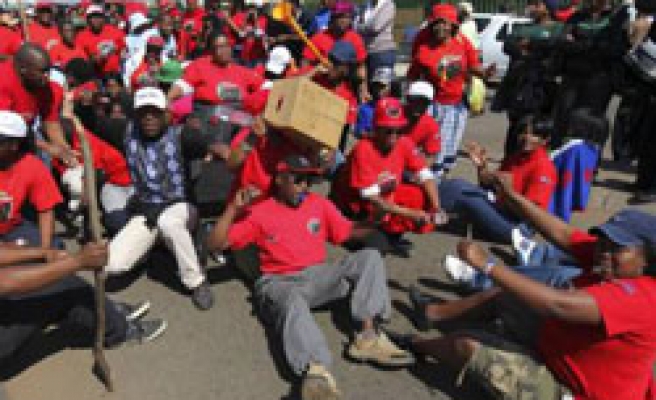 Strikers blocked the entrances to two hospitals around Johannesburg and teachers vowed to blockade a main highway as a stoppage by more than 1 million civil servants expanded on its second day on Thursday.

The strike for higher wages has slowed the treatment of the sick and shut schools across South Africa, adding pressure on the government to reach a deal.

A union representing 200,000 workers planned to join the work stoppage that began on Wednesday among a coalition of unions that represent over 1 million civil servants.

The strike was not expected to have any immediate impact on Africa's largest economy but a prolonged work stoppage could slow commerce at home and trade abroad.

The groups staged a one-day warning strike last week and said the action that began on Wednesday was the start of an indefinite strike aimed at grinding the government to a halt.

Analysts expect a deal to be reached in the next few days at the earliest or by the start of September at the latest, with any agreement certain to swell state spending as the government tries to bring its deficit down from 6.7 percent of gross domestic product.

Last week the government offered to increase a monthly housing allowance to 700 rand from a previous offer of 630 rand, but refused to increase its wage rise offer of 7 percent.

The housing allowance alone would be equal to about 1 percent of all government spending.

The strike increases pressure on President Jacob Zuma's ruling African National Congress to reach a deal with organised labour and appease the party's longstanding union allies who also have been a reliable source of votes.

But pressure will also mount on unions to reach a deal as rank and file members lose pay from being off the job and some look favourably on the government's offer.