Hundreds of thousands of South African state workers returned to their jobs on Tuesday after suspending a three-week strike which hit schools and hospitals. 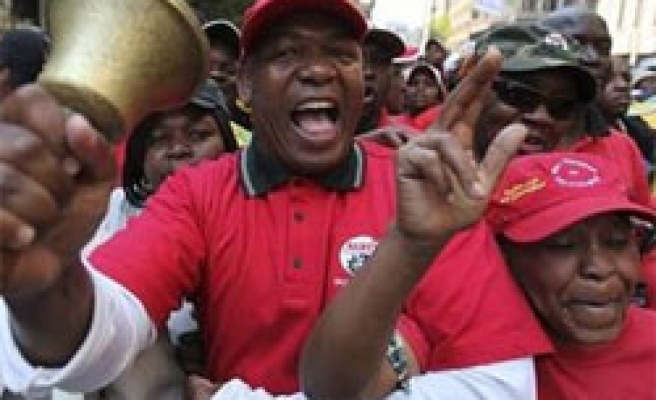 Hundreds of thousands of South African state workers returned to their jobs on Tuesday after suspending a three-week strike which hit schools and hospitals.

Union officials were giving themselves 21 days to finalise a draft agreement with their members that could end the conflict over wages that prompted 1.3 million workers to walk off their jobs, affecting public services across Africa's biggest economy.

"The majority of our members have returned to work," said Manie de Clercq, spokesman for the 211,000-strong Public Service Association.

Nomusa Cembi, a spokeswoman for the South African Democratic Teachers' Union which has 245,000 members, said schools were expected to operate normally from Wednesday.

President Jacob Zuma's government, under significant pressure from the walkouts, has been forced to raise its initial offer and is now promising a 7.5 percent wage increase and 800 rand for housing.

Workers have rejected that, but unions asked for more time to explain it to their members.

In South Africa, strikers are not compensated for missed work days by their unions and some have already forfeited nearly three weeks of pay.

"They have lost a lot of money but this shows how serious the workers were about improving their position. I think they have succeeded. Even though they haven't received the 8.6 percent they won other concessions," De Clercq said.

The prolonged labour action has highlighted tensions between the powerful COSATU labour federation and the African National Congress (ANC), whose governing alliance helped vault Zuma into the presidency in May 2009.

South Africa is trying to rein in a budget deficit that totalled 6.7 percent of gross domestic product (GDP) in the fiscal year that ended in March. The government's budget for the current year, agreed in February, foresaw a more modest 5.2 percent wage increase for state workers.

As a result, government officials have said there is no room in the budget to further increase the pay offer, which would swell state spending by about 1 percent.

The biggest strike since 2007 has had little impact on the South African bond, stock and currency markets. But economists said the labour action, which saw police use rubber bullets and water cannon against workers, had been costing the economy about a billion rand a day.