Thousands of striking public service workers marched through major cities across South Africa on Thursday on the ninth day of a crippling strike. 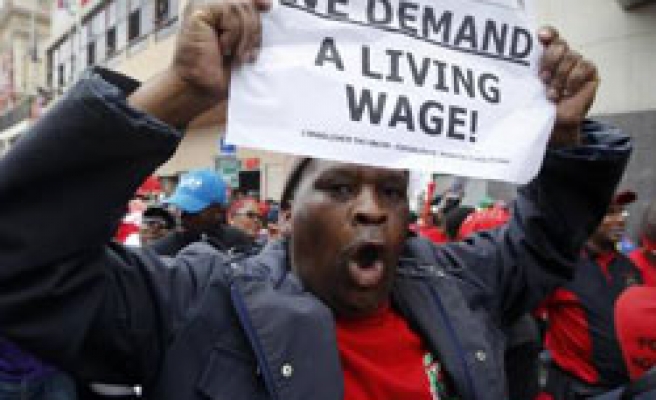 Thousands of striking public service workers marched through major cities across South Africa on Thursday on the ninth day of a crippling strike that unions have vowed to intensify.

Marches in more than 20 cities and towns were scheduled as unions representing over a million workers, who began an indefinite strike on August 18, threatened to widen the stayaway into a total industrial shutdown.

"The strike must end in a positive way for public service workers. We will not accept defeat in this particular action," Zwelinzima Vavi, general secretary of the country's main labour federation COSATU told reporters.

Thousands of workers marched through Cape Town and Johannesburg as they sang and waved placards, vowing that the strike will continue until the government gives in.

COSATU threatened to sever its long-standing alliance with the ruling African National Congress.

About 1.3 million unionised employees have walked out in the standoff, shutting schools and cutting off medical treatment at hospitals.

The comments were one of the strongest signals to date that organised labour, which helped President Jacob Zuma ascend to the presidency, may be ready to cut, or change, a relationship with the ANC that was forged in their struggle to end apartheid.

The state workers' strike has had no major impact on rand and bond trading but market players said worries would mount if it extended into September and other labour groups joined in.

COSATU said it filed 7-day strike notices on Thursday so that all its 2 million members could join the state workers in a strike they said would also target the mining and manufacturing sectors, a step which could grind the country to a halt.

On top of the wage dispute, the leader of the ANC's Youth League Julius Malema fired what amounted to a warning shot at Zuma on Wednesday, questioning his leadership and implying the ruling party's youth wing would not support Zuma for a re-election bid.

COSATU also wants the government to reverse a 9-billion-rand deal involving mining giant ArcelorMittal that transfers 26 percent of its local shares to employees and black investors including a consortium led by Zuma's son, Duduzane.

"We are heading rapidly in the direction of a full blown predator state, in which a powerful, corrupt and demagogic elite of political hyenas increasingly controls the state," Vavi said, as he took a swipe at Zuma over the heavily criticised deal.

The government has said it cannot afford the state workers' demand of an 8.6 percent wage rise, more than double the inflation rate, and 1,000 rand ($136) a month as a housing allowance. It has offered 7 percent and 700 rand.

An expanded strike would add to worries about prospects for growth after the economy slowed more than expected in the second quarter of 2010 as mining contracted and manufacturing expanded at a slower pace.

In Johannesburg's Soweto township, where police have clashed with strikers trying to block the entrance to a hospital, anger was building at the government for not reaching a deal and at strikers for denying services to the poor.

"We work for the government and we live in shacks," said one healthcare worker who only identified himself as Joseph.