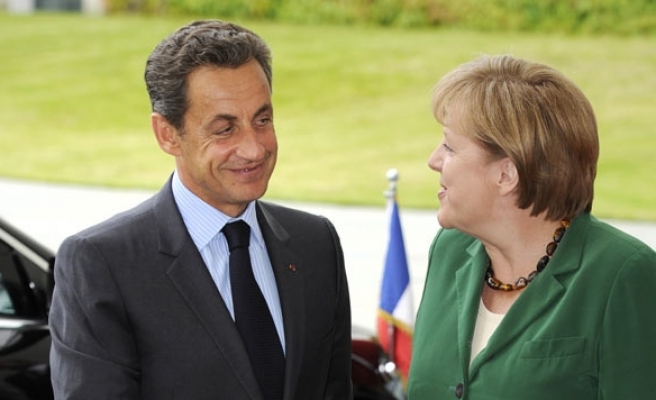 The leaders of France and Germany meet for high-pressure talks on Tuesday to discuss what further measures they can take to shore up investor confidence in the euro zone following a dramatic market sell-off last week.

President Nicolas Sarkozy and German Chancellor Angela Merkel are under pressure to show financial markets they are in agreement on doing more to shore up the embattled currency union or risk watching the euro zone unravel.

The two leaders could discuss obliging all euro zone countries to pass national laws on deficit limits and the idea of a permanent euro zone spokesperson or coordinator, a source close to the talks told Reuters.

Many experts believe the only way to ensure affordable financing for the bloc's most financially distressed countries would be for the euro area to issue joint euro bonds.

But officials in Paris and Berlin have tried to play down expectations over the 1400 GMT talks and 1600 GMT news conference, saying euro bonds are not on the agenda , and many analysts cautioned against expecting too much.

"(Sarkozy) is not going to pull out of a hat three wonderful rabbits that will reassure the world's markets," French political economist Alain Minc told Europe 1 radio.

Ordinary Germans have opposed more help for their weaker neighbours even while their economy has been roaring along. Data on Tuesday showing German GDP barely grew in the second quarter suggests a slowdown is starting to grip there, making underwriting of euro zone debt an even harder sell politically.

"While German politicians are currently racking their brains on the pros and cons of common Euro bonds, the luxury of having an economy running at "wonder" speed is fading away," said Carsten Brzeski at ING.

The German economy grew by just 0.1 percent in the second quarter, while the French economy stagnated.

Sarkozy and Merkel had already planned to meet this week to push ahead on their July 21 pledge to come up with new proposals on euro zone economic governance, but the stakes were raised when France was slammed in last week's global market rout.

Fearing that the euro zone debt crisis is spreading to the continent's core, investors dumped shares in French banks, which are exposed to Italian debt, as rumours circulated -- denied by rating agencies -- that France's AAA-rating could be at risk.

The sell-off was evidence markets were not convinced by a July 21 deal to give new powers to the euro zone's EFSF rescue fund and for Paris and Berlin to come up with proposals on coordinating economic governance by the end of August.

The two leaders are expected to discuss holding regular euro zone summits, as France has long sought, ways to improve peer monitoring of fiscal policies or even fiscal harmonisation.

Jean-Pierre Pollin, a member of France's Circle of Economists think tank, told the daily Le Parisien it was now unavoidable that euro zone states give up some sovereignty. "The monetary union inevitably implies a political union," he said.

Issuing euro bonds remains one of the most obvious ways to ensure affordable financing for high-debt members and many experts believe Germany may be forced to eventually back the idea, despite the upward impact on its borrowing costs.

Italian Economy Minister Giulio Tremonti said on Saturday that euro bonds would be the best solution to Europe's debt crisis, and Germany's export association said on Monday that all other means of fighting the crisis had run out.

Germany's mass-circulation Bild newspaper warned Merkel on Tuesday not to cede on the issue of euro bonds, which some backbenchers in her Christian Democrats (CDU) party say should at least be debated.

"Euro bonds would ultimately make Germany the paymaster of Europe," wrote Bild on Tuesday. "The government must stick to its NO on euro bonds. All the debt sinners must clearly sort themselves out once and for all."

Austria's finance minister said it was to early to imagine joint euro bond issuance and a Dutch government coalition party said it opposed the idea.

Sarkozy, who faces the tough choice of whether to close tax loopholes or trim spending eight months before a presidential election, has interrupted his summer holiday to meet Merkel and key French government ministers this week.

He has ordered his budget and finance ministers to find ways to plump up the 2012 budget by several billion euros as France strives to convince investors it will meet its deficit-cutting targets despite disappointing growth.

His and Merkel's proposals for tighter euro zone governance will be evaluated by European Council President Herman Van Rompuy, who has been charged with putting together a package on economic coordination for an EU summit in October.

"If we just stick to the July 21 agreement then, before the end of the year, there will be no euro zone, unless the ECB buys everything."

Economist Frederic Bonnevay at French think-tank Institut Montaigne also said more radical measures were needed, suggesting the EFSF rescue fund's firepower should be raised to as much as one trillion euros from 440 billion euros currently.