Their message was that the focus should be on further economic integration rather than signing bailout cheques. 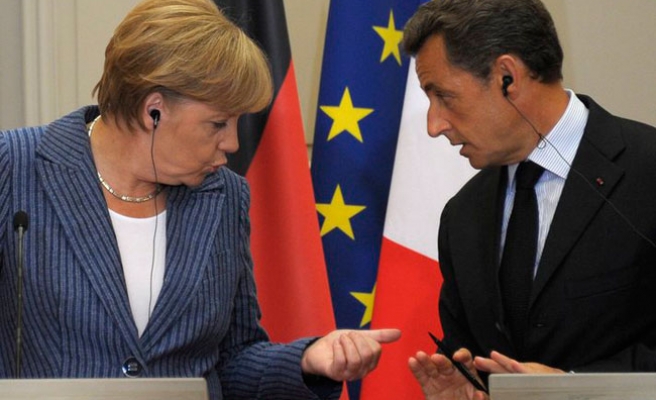 France and Germany unveiled far-reaching plans Tuesday for closer euro zone integration on Tuesday but they disappointed investors by declaring that any thoughts of common euro bond issuance would have to wait.

Under heavy pressure to restore confidence in the euro zone following a dramatic market slump, President Nicolas Sarkozy and Chancellor Angela Merkel stopped short of increasing the bloc's rescue fund but vowed to stand side by side in defending the euro and laid the groundwork for future fiscal union.

Their message was that the focus should be on further economic integration rather than signing bailout cheques, and suggested that straying from euro zone rules and fiscal targets would no longer be tolerated.

It was the lack of action on the creation of euro zone- backed bonds that triggered further concern in financial markets that European leaders aren't showing the ability to contain the region's sovereign debt crisis.

"The market wanted to see at least some forward movement, something concrete coming out of the meeting that would've been supportive to what's been dragging the market lower," said Marc Pado, U.S. market strategist at Cantor Fitzgerald in San Francisco.

Merkel and Sarkozy's announcement of a plan to tax financial transactions also hit stocks of some companies traded in the United States. Shares of NYSE Euronext fell 8.4 percent to $26.54, making it the worst performer in the S&P 500, which itself slipped almost 1 percent.

"We have exactly the same position on euro bonds," Sarkozy told a joint news conference with Merkel after their talks.

"Euro bonds can be imagined one day, but at the end of the European integration process, not at the beginning."

Many experts say a common bond is the only way to ensure affordable financing for euro zone members struggling with debt.

The euro also slid as the proposals failed to ease worries about a debt crisis markets fear is spreading to the euro zone's core. Traders had hoped for signals that the issuance of common euro bonds, or an increase of the EFSF, were live options.

"This meeting is all stick -- fiscal rule enforcement -- and no carrot -- a pooling of fiscal resources via a common bond," Rabobank strategist Richard McGuire said.

The statement by the two leaders reflects deep hostility, among voters in northern Europe tired of bailing out the south at a time of austerity at home. That is particularly true in Germany, where growth slowed to almost zero in the second quarter.

"Anyone expecting this meeting to launch euro bonds was not paying attention to the state of political opinion or indeed to the kind of compromises needed for that to happen," said Julian Callow, senior economist at Barclays Capital in London.

In a further rap to financial market players, whose panic selling this month wiped some $4 trillion off global stocks and sparked a temporary ban in Europe on short-selling, Sarkozy and Merkel also proposed taxing financial transactions.

In plans to be sent on Wednesday to European Council President Herman Van Rompuy, the two leaders want a president to be elected to represent the euro zone and twice-yearly meetings of the leaders of the embattled 17-nation bloc.

In one of the most far-reaching ideas, Sarkozy said the French and German finance ministers had been asked to prepare proposals aimed at having a common corporate tax base and tax rate in France and Germany from 2013. He said the two countries would keep a closer track of each others' economic outlooks.

Analysts queried the feasibility of a financial transaction tax, which was an unexpected proposal, given opposition from some European countries and the European Central Bank.

Callow said that while markets needed to see "more flesh on the bones" of the proposals, it was significant that the two leaders had broken into the August holiday period to meet.

"They are pledging a commitment to economic governance which is a step forward and there is also a commitment to a debt brake, although it remains to be seen whether that will be significantly strong," he said.

"Each side is surrendering some sovereignty which in the end could pave the way to much closer political union and so prepare the ground for the issue of euro bonds."

The full details of the written proposals to Van Rompuy will be made public Wednesday, Sarkozy's office said.

Euro is a set of rules

Sarkozy and Merkel -- under pressure to convince markets the euro zone is sound or risk watching it unravel -- said their first proposal was for "a real economic government" for the euro zone, with a president elected for two-and-a-half years.

"Germany and France feel absolutely obliged to strengthen the euro as our common currency and further develop it. And it is entirely clear that for this to happen, we need a stronger interplay of financial and economic policy in the euro zone," said Merkel, who went on to a working dinner with Sarkozy.

Sarkozy said that if adopted, their proposal that euro zone governments should enshrine deficit-limiting rules into their constitutions would be obligatory, not optional.

"The euro has allowed us a lot of economic progress but the euro is not just a right, it's a set of rules, a duty, a discipline," he said. "Consequently if the rule is to be adopted by the 17, it will not be an optional rule but obligatory."

While it was unclear how governments could be forced to adopt politically difficult constitutional changes, Sarkozy's tone suggested there would be no more tolerance for straying from rules and even raised the spectre of a two-speed union.

"Too little too late?"

Officials in Paris and Berlin had played down expectations ahead of Tuesday's meeting, saying euro bonds would not be on the agenda, but markets were still disappointed.

"Rather than the additional check-writing by core European governments that certain markets were looking for, including a new euro bond, they are getting a fiscal discipline golden rule, stronger economic governance, and a new financial transactions tax," said Mohamed el-Erian, co-chief investment officer at Pacific Investment Management Co in California.

The refusal to contemplate a euro bond at this stage is frustrating investors, who have seen Europe's response to the dragging crisis as too little too late. They see the common bond as the bloc's best chance of getting ahead of the curve.

Merkel's own conservatives are strongly opposed to a second bailout of Greece according to a recent poll. Sarkozy, already facing a tough re-election battle next year, is having to push through austerity measures to convince markets France can retain its triple-A rating.

Sarkozy and Merkel had already planned to meet this week to discuss their proposals on euro zone governance, but the stakes were raised when French assets hit in last week's market rout.

Investors dumped shares in French banks, which are exposed to Italian debt, as rumours circulated -- denied by rating agencies, that France's AAA-rating could be at risk.

That sell-off was evidence markets were not convinced by a July 21 deal to give new powers to the euro zone's EFSF rescue fund and for proposals to be made on closer economic governance.