"German hegemony of the Eurogroup has been growing over the last two years and is increasing almost by the day now," said an official who sits with Schaeuble in the 17-member group. 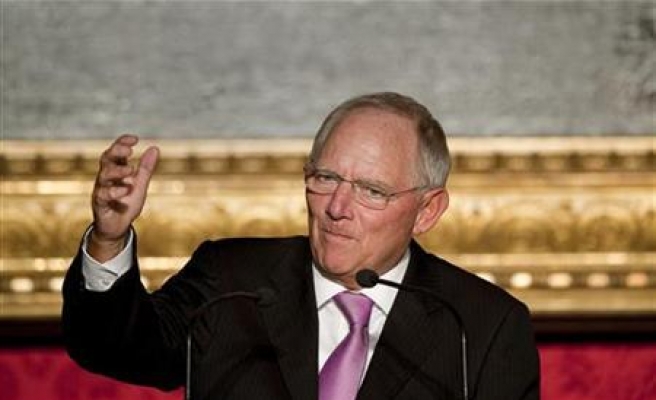 Two years ago, German Finance Minister Wolfgang Schaeuble was on the point of giving up his role as iron fist in the euro zone debt crisis, but the 70-year-old champion of closer European integration now seems likely to remain on Europe's centre stage.

Chancellor Angela Merkel, who made her independent-minded and famously irritable former rival finance minister in 2009, is expected to reappoint him if, as widely forecast, she wins a third term in the Sept. 22 parliamentary poll.

Differences in their visions of Europe may curtail some of his plans, but the enormous clout he wields among European policymakers dealing with the four-year-old euro zone debt crisis shows no sign of waning.

"German hegemony of the Eurogroup has been growing over the last two years and is increasing almost by the day now," said an official who sits with Schaeuble in the 17-member group.

Such is his importance that the head of the International Monetary Fund, Christine Largarde, broke off from marathon talks to agree a bailout for Cyprus in March to make a late night visit to his office herself.

"Nobody wanted to imagine what would happen if he had left the building in a huff," a source close to the negotiations told Reuters. "The volcano was not allowed to erupt."

Merkel needs Schaeuble not only for his sharp intellect and as a contrast to her power politics, but to woo the party's conservative south-western power base.

Wheel-chair bound since a mentally ill man shot him in 1990, he is one of Germany's most popular politicians and has hinted strongly that he wants to stay on.

Just two years ago, the man who negotiated German unification offered to resign when recovery from an operation was longer and tougher than expected. He was also badly shaken by the deaths of his two brothers, in 2011 and early this year.

But he has returned to full health and works often gruelling hours. "I still enjoy politics otherwise I would not stand as a candidate again," he told Reuters.

Schaeuble is unlikely to alter his insistence on tough budget cuts and reforms for indebted European states after the vote bearing in mind he also plans to cut debt for Germany, which forecasts growth of just 0.4 percent this year after 4.2 percent in 2010.

"Schaeuble makes compromises, but it's his initial position that forms the benchmark of the debate with the small margins for manoeuvre he indicates he is willing to accept," said an official with close knowledge of the workings of the Eurogroup.

With the election out of the way, however, he may be willing to compromise on some hot topics on hold until after Sept. 22.

One of those is the establishment of a single authority to shut or repair troubled eurozone banks, a part of banking union that has stalled because of German opposition on legal grounds.

Seeing the euro zone crisis as an opportunity to further political integration in Europe, he has got his party to back the idea of a directly elected European Commission President to give such integration a face.

"Europe is close to my heart," says the man who grew up near the French border, an area where the post-war divisions were more tangible than elsewhere in Germany.

Merkel distanced herself from the party position in June, telling Der Spiegel magazine a directly elected EC president "would throw the entire structure of the EU out of balance".

It was one of many blows the chancellor has dealt to Schaeuble, Germany's longest-serving member of parliament and the eternal number two in conservative politics, initially as heir-apparent to Helmut Kohl, then loyal to Merkel.

In 1999, she pushed her career at his expense and later passed him over when he had ambitions to become president. But she often lets him deviate from her line, so much so that some Brussels officials wonder if he speaks for himself or Berlin.

His European colleagues fear him, beyond the unpopularity any German finance minister might attract for representing the continent's largest economy.

"If you are on his side of the argument, you feel very good. But if you are the one with whom he is arguing, you wish you had never spoken," said one euro zone official, adding Schaeuble might bang the table or tap his finger next to the microphone when he gets angry.

Behind closed doors, some also say Paris was outraged when Schaeuble, concerned about the health of the zone's second biggest economy, asked a panel of German economic advisors to look into reforms France needed.

But days after the news broke of the affront against Germany's closest ally, he showed his political skill by holding a joint news conference with his counterpart Pierre Moscovici to soothe any suspicion of discord.