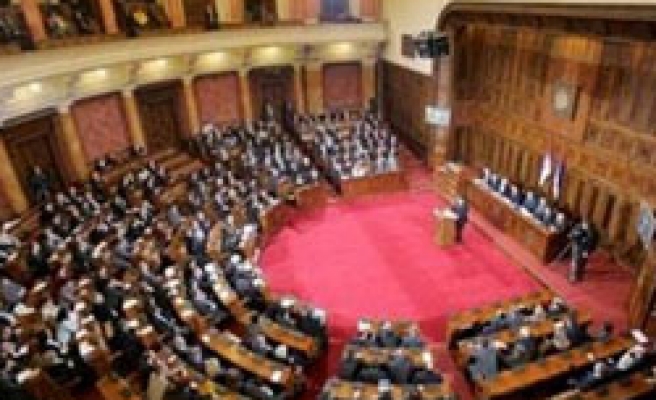 Serbian Finance Minister Lazar Krstic resigned on Saturday, saying more radical reforms to rein in public spending were needed which the prime minister said were too harsh to implement.

The 29-year-old minister announced his resignation after the government adopted a raft of changes to labour and pension legislation as part of a promised bid to cut public spending and attract foreign investment.

The changes raise the retirement age for women and loosened rules on hiring and firing.

But Krstic said he had wanted them to go further, faster, in spite of opposition from trade unionists who have threatened to take to the streets.

"We have different approaches to the dynamics," Krstic said. "The prime minister has a good heart, and that's why he has the support of the people.

"I considered that these measures should be implemented immediately. I think the prime minister and the finance minister should have the same approach, and that's why I have resigned."

Handpicked by Vucic last year, Yale graduate and former McKinsey consultant Krstic was a surprise choice for the post of finance minister given his relatively young age and lack of political experience.

Vucic said he would be replaced temporarily, and possibly for the longer term, by Economy Minister Dusan Vujovic.

He said Krstic would remain as his special adviser in talks with the International Monetary Fund. Full loan negotiations are expected in the autumn, but Vucic said "consultations" would begin soon, without specifying their nature.

Vucic said Serbia would press ahead with fiscal consolidation, but that Krstic's approach would be too painful.

"It's not about my political fate and what workers and pensioners will say, but whether one can implement it or not. I am not capable of doing it," he said.

A government official, who spoke on condition of anonymity, told Reuters: "Krstic said we should swallow the bitter pill, we should do it right now, but Vucic said the people of Serbia would not accept it."

Krstic's sudden departure will likely rattle investor nerves over whether the government can follow through on its promises of radical reform.

The amendments to the labour law adopted on Saturday introduce more flexible rules on hiring and firing and regulate the payment of wages and social benefits, an area frequently abused by cash-strapped employers.

The changes lower the taxes on wages that employers must pay, potentially cutting the number of people working in a vast grey economy.

The amendments to pension law include rising of the retirement age for women from 60 to 65 and envisages penalties for those who decide to retire early. Serbia has some 1.7 million pensioners, slightly more than its total workforce. Unemployment stands at around 24 percent.

Parliament will debate the new legislation next week.

Serbia's 40-billion-euro economy faces economic contraction this year following huge floods in May that killed 57 people and inflicted around 1.5 billion euros in damage to homes, infrastructure and the energy sector.