France, Italy, Spain and Belgium banned short-selling of some of their stocks from Friday to limit volatility and improve the mood on markets hit recently by a flurry of rumours about banking problems. 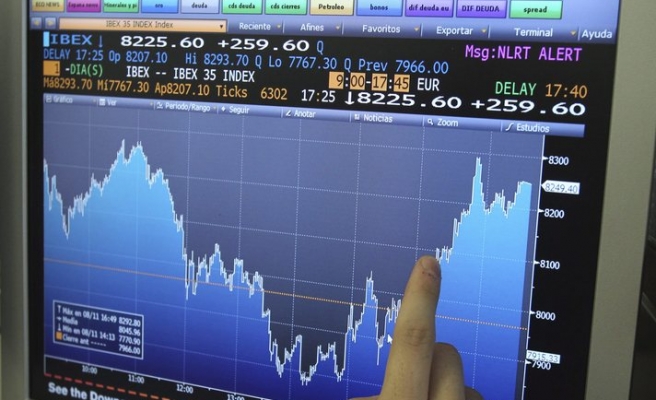 European stock markets struggled early on Friday as a ban on short-selling of financial sector shares failed to put a lid on concerns over banks and the spread of the euro zone's debt crisis to France.

World shares edged lower after sharp gains a day earlier as investors resumed a sell-off of riskier assets that has knocked more than 10 percent off stock prices in the past two weeks.

The FTSEurofirst 300 index of top European shares fell 1.3 percent in early trade, reversing a 2.7 percent gain the previous day before inching back into positive territory. Early losses in European shares pushed the euro down to a session low against the dollar.

Bank shares in the STOXX Europe 600 Banks index crept up after falling nearly 2 percent at opening.

Shares in France's largest banks have taken a beating on concerns about their exposure to debt issued by Italy and others of the euro zone's highly-indebted southern states.

France, Italy, Spain and Belgium banned short-selling of some of their stocks from Friday to limit volatility and improve the mood on markets hit recently by a flurry of rumours about banking problems, all of which have been denied.

Ion-Marc Valahu, who helps run Geneva-based fund management firm ClairInvest, said the short-selling ban might not have that much of an impact in the long term.

"In the short-term it will help calm things down, but if you look at what happened at Lehman during the crisis, it didn't do much," Valahu said.

"You can still short futures and options," he added.

Volatility across financial markets has spiked over the past few weeks, with rumours flying about the health of European banks, questions mounting about the stability of money markets and growing fears that the U.S. economy may tip back into recession or a prolonged period of tepid growth.

"The risk-averse sentiment has not gone away really. For today, the bears are resting," said Kumar Rachapudi, a fixed income strategist at Barclays Capital in Singapore.

Losses in the euro helped to prod the dollar 0.2 percent higher against a currency basket .

The safe-haven Swiss franc clawed back some losses after a dramatic sell-off the previous day, but investors remained wary of pushing it too high given the possibility that the Swiss central bank may step up measures to stem the currency's strength.

Oil prices fell, with Brent crude pushing 1 percent lower on the day and reversing gains made in the last two days as concerns about dwindling demand from industrialised nations put some commodities under selling pressure.