About 40 percent of all Somali families rely on remittances from another country, and the estimated annual total of $1.3 billion is more than all foreign aid and investment in Somalia combined, according to a study published last year by human aid organizations Adeso, Oxfam and the Inter-American Dialogue. 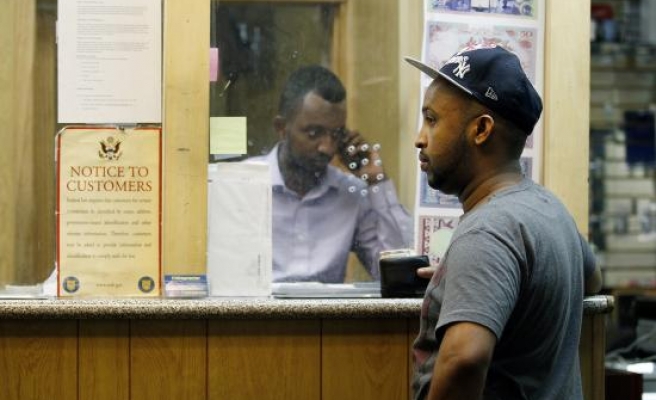 Each month, 42-year-old Abdirizak Alibos shows up at a money transfer business in the heart of Minneapolis to send $500 to his three children in war-torn Somalia.

"I send them money that they can pay for ... groceries, school fees, that they can buy health insurance, medication," said Alibos, who escaped to the United States seven years ago and now has a business driving people to medical appointments.

"I can say that 50 or 60 percent of my children's lifeline is remittance," he said.

But he and other Somali expatriates fear that they soon might not be able to give their families any more financial help. It is not money that they are about to run out of but the legal options for sending it home.

About 40 percent of all Somali families rely on remittances from another country, and the estimated annual total of $1.3 billion is more than all foreign aid and investment in Somalia combined, according to a study published last year by human aid organizations Adeso, Oxfam and the Inter-American Dialogue.

For more than two decades, the African nation of 10 million people has been a land of chaos because of divisive clan fights during its civil war and more-recent Islamist militant insurgents with links to al Qaeda.

Commercial banking disappeared in the early 1990s, and Western money transfer companies such as Western Union Co and MoneyGram International Inc do not serve most parts of Somalia.

This leaves the significantly cheaper and more informal money service businesses, or MSBs, to serve as intermediaries between the foreign banks that make the wire transfers and the intended recipients of the money.

As these transmitters attracted attention from U.S. regulatory agencies that fear money launderers or militant groups would exploit them, banks around the world have been rapidly closing their accounts.

These "de-risking" moves affect all transmitters, including the most numerous ones for Latin American countries, but are most devastating for Somalia, where people have no alternative, affordable channel to get remittances.

A decade ago, money transfer business owners could choose from several large banks to do international wire transfers. Today most no longer do so, even in the largest Somali expatriate hubs of Britain, the United States and Canada.

The fewer the banks, the fewer locations get served in Somalia and in the cities of the expatriates, money transfer companies said.

Less competition could also mean higher charges to send money to Africa, which are already twice as much as to South Asia and well above the 7.8 percent global average.

Merchants Bank of California, the last large U.S. bank specializing in check cashing and money transmission, has alerted a dozen of its money transmitter clients that it will close their accounts by July 31 "due to the ever-changing regulatory requirements and expenses."

The news prompted Alibos and a few dozen Somali immigrants to protest at the U.S. Treasury building of St. Paul, Minnesota, on Friday. This is the eve of the monthlong Ramadan holiday, when Muslims traditionally give extra money to the needy.

Minnesota Congressman Keith Ellison, a Democrat and long-time supporter of money transfer companies, joined the rally. Ellison's Money Remittance Act, aimed at limiting regulatory barriers for MSBs, was approved by the U.S. House of Representatives and is now with the Senate.

Ellison said at the protest that the U.S. war on terrorism is hindering people from sending money home.

"Treasury has been so aggressive at that they've stopped good people from sending money to good people," he said.

While U.S. regulators do not prohibit banks from doing business with money transfer companies, they require them to have an adequate compliance program, said a spokesman for the Office of the Comptroller of the Currency, which supervises banks.

The challenge, bankers say, is that no one knows what an adequate compliance program is.

"From a business standpoint, it was cost-prohibitive to continue to monitor these types of high-risk accounts," said Matt Stenehjem, fraud and security officer of North Dakota’s Bell State Bank, which recently closed all of its MSB accounts.

The largest money transfer business in Somalia, Dahabshiil will continue banking with Merchants. It was less fortunate in Britain, one of its most important jurisdictions.

Dahabshiil has arrangements with banks all over the world except in Britain, said interim manager Mike Aynsley, a former chief executive officer of Anglo Irish Bank.

The UK is the second-biggest remittance source for Somalia at about $163 million a year, according to data cited in the human aid groups' study. Barclays Plc, one of the last large banks handling MSB accounts there, announced in April that it would no longer do so.

Dahabshiil is talking to other major British banks about opening accounts with them, Aynsley said.

In Canada, the number of MSBs serving Somalia fell to three from 11 during the last decade, said Abdirizak Omar-Godane, an anti-money laundering specialist based in Toronto.

One bank that still offers wire transfer for them is the Royal Bank of Canada.

The bank does not disclose specific information about its approach to MSBs, a spokesman said, adding that it complies with the laws and regulations in the markets where it operates.

The situation is about as serious as it can get, said Jorge Guerrero, co-founder of the Great Neck, New York-based National Money Transmitters Association and CEO of the Compass anti-money laundering compliance consultancy.

Closing MSB accounts actually exacerbates the risk of money laundering, Guerrero said, because expatriates may then try to send money to relatives through illegal channels, which are much more difficult to control.

"That money is a lifeline, and if it’s lost, the ramifications are tremendous," Guerrero said. "(It is) not just one company going down and its employees have to look ultimately for work, but it is what people are willing to do when desperation hits."

Alibos said his biggest fear was that without his support, his children might get recruited by militant groups.

"If the lifeline is closed, there could be more violence," he said. "There could be a lot of moral problems."