South Africa in talks for mine peace

Bringing all the parties together to secure a symbolic peace deal could prove successful, but the strike at Lonmin's Marikana mine, northwest of Johannesburg, may be far tougher to resolve. 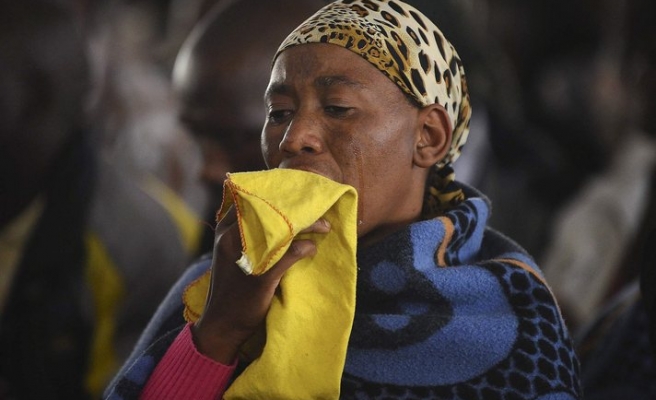 Feuding South African unions, platinum producer Lonmin and government officials tried on Wednesday to broker a peace accord at a mine where 44 people were killed in the worst such violence since the end of apartheid.

They also want to use the meeting to start wage talks over the dispute that has paralysed production at Lonmin's Marikana mine and raised worries of unrest spreading through the country's platinum sector, further shaking the economy.

Bringing all the parties together to secure a symbolic peace deal could prove successful, but the strike at Lonmin's Marikana mine, northwest of Johannesburg, may be far tougher to resolve.

"If there is no 12,500 rand ($1,500) a month, no workers will be going back," Zolisa Bodlani, a representative for the striking workers, said ahead of the meeting.

Strikers say they have sacrificed too much to settle for less than their demands. Lonmin said it had an average 7.7 percent attendance across all shafts on Wednesday morning.

Mining operations at Lonmin , the world's third largest producer of platinum, have been effectively frozen for more than two weeks due to the labour strife, sending spot prices for the metal up and share prices for Lonmin down.

The 3,000 strikers are mostly rock driller operators, who the company says are paid about 9,800 rand with an average monthly bonus of 1,500 rand.

The killing of miners in the worst security incident since the end of apartheid in 1994 has steeled the resolve of strikers who see their dead comrades as martyrs and feel any compromise will be a sellout.

Thirty-four were killed in a hail of police gun fire. Ten people, including two police officers and two security guards, were hacked to death days earlier.

Many of the striking miners also do not have a recognised union bargaining on their behalf.

Many have moved to the camp of the upstart and militant Association of Mineworkers and Construction Union (AMCU) and it is not clear who is representing who in all cases.

Some just wait in their shacks near the mine staying away until someone secures them a better deal.

But almost all of the strikers feel the established National Union of Mineworkers has failed them - caring more about mine bosses and political leaders than the worker in shafts.

The dominant NUM has been able to keep peace in the sector by typically limiting the duration of strikes to periods that do not cause major harm to the bottom line of mining firms or the purse strings of miners who lose out on wages.

NUM represents about 11,000 of the 28,000 workers at Lonmin but it has not been able to get its members to return to their posts, with many too intimidated by possible attacks from AMCU members and strikers to go back to their jobs.

Lonmin will be cautious of sparking more violence at Marikana, especially when it is facing a government investigation for its role in the deaths at the mine.

With some of the highest labour costs in the sector, it will also be reluctant to hike personnel expenses, especially at a time when platinum miners are seeing their balance sheets strained by low spot prices.

The African National Congress government also has its hands tied due to its close ties to labour federation COSATU, which has the NUM as its flagship union.

Opposition politicians have criticised the ANC for being too concerned about increasing wages for COSATU members and not doing enough to end an income disparity that is among the worst in the world.

The incident dubbed "The Marikana Massacre" has hit the base of support that brought President Jacob Zuma to power, with ANC insiders telling Reuters that Zuma's foes plan to use the incident to discredit the president as they jockey for power at elections for party leaders in December.

The base pay for miners is about $500 a month but when bonuses and benefits are added the average miner grosses over double that, according to industry and government data.

The median figure masks stark differences across the pay scale. The money goes quickly. Most miners maintain two households, with one on or near the mine site and the other for extended families. The typical miner supports 8-10 people.