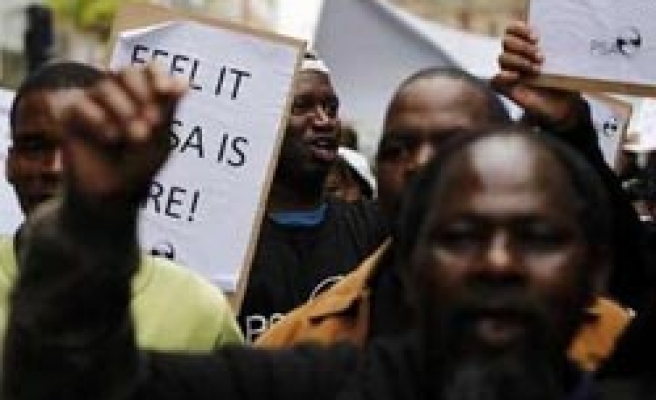 Tuesday's action is not supposed to cause much damage but it increases pressure on President Jacob Zuma's government to reach a deal to prevent a repeat of a prolonged public sector strike three years ago that dented the economy and damaged support for Zuma's predecessor.

Marches have been planned for Cape Town and Pretoria, South Africa's administrative capital, as part of a "total shut-down of the public service", according to the country's largest umbrella labour organisation COSATU.

Everything from schools to public offices to immigration centres are expected to be affected in the strike, although essential services such as police and hospitals are likely to run on a skeleton staff.

"We want to indicate to the government that if they do not give us what we want, we could have a total shut down for a significant period," said Manie De Clerq, spokesman for Public Servants Association union.

He said the unions and government negotiators planned talks later on Tuesday after the protest marches were over.

"In a strike of this magnitude it is difficult to make sufficient contingency plans to ensure business runs as usual but we have employed contract workers to make sure government departments will not be closed," said Dumisani Nkwamba a spokesman for the public service ministry.

COSATU and its member unions have threatened to drag the industrial action beyond Tuesday if government does not meet its demands of an 8.6 percent pay hike -- twice the current rate of inflation -- and a 1,000 rand ($138) monthly housing allowance.

The government is offering 7 percent and 630 rand for housing, although analysts believe it is likely to raise its offer rather than risk a repeat of a prolonged 2007 civil service walk-out that hit the economy.

Analysts expect the ruling African National Congress, which has a longstanding alliance with organised labour, to give in to the unions' demands. But such a deal will make it hard to bring the deficit down from 6.7 percent of GDP without spending cutbacks elsewhere.

The government, which budgeted for wage increases based on a 5.2 percent inflation projection, has not said how much more it would spend under its offer or the deal sought by the unions.

In an indication of how costly the deal could be, just the 1,000 rand monthly housing allowance sought by the unions could account for more than 1 percent of the state budget.

The government said its offer package would amount to an average 9 percent increase for 1.3 million unionised public servants.

A mid-grade public sector employee makes on average 8,800 rand a month in salary and benefits, above the national average of 6,383 rand, according to government figures.