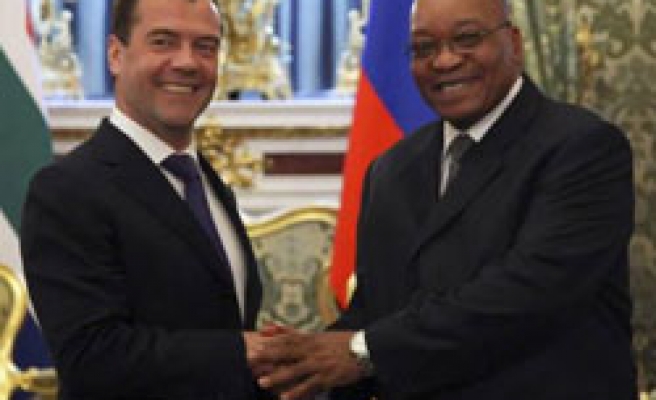 Russia agreed on Friday to supply more low-enriched uranium to South Africa's only nuclear power station, a contract that will give Russia's uranium trader nearly half of Africa's biggest market for enrichment services.

The deal, which extends an earlier agreement from the 1990s, was signed after Kremlin talks between South African President Jacob Zuma and his Russian counterpart Dmitry Medvedev.

Under the deal Russia's state uranium trader Techsnabexport will supply uranium enrichment services to companies such as Westinghouse Electric, owned by Japan's Toshiba Corp, for delivery to the Koeberg nuclear power plant.

"Our share of the market in South Africa will rise," Sergei Kiriyenko, the head of Russia's state nuclear corporation Rosatom, told reporters in the Kremlin.

Deliveries under the contract will begin in 2011 and last until 2017-2018, Kremlin documents seen by Reuters showed.

Zuma, who leads Africa's biggest economy, is seeking to increase trade with Russia and China, which are forecast to grow about 4 percent and 10 percent respectively this year.

"We seek to strengthen economic and trade relations by focusing on the implementation of existing projects," Zuma said. "We also want to identify new opportunities."

But bilateral trade between South Africa and Russia remains tiny, totalling just $517 million last year, a fraction of a percent of Russia's total external trade turnover of $469 billion, according to Russian statistics.

Some investment bankers in Moscow say that Russia has been much slower than China to appreciate the potential benefits of investment in Africa.

During Medvedev's maiden trip to Africa a year ago, Medvedev did not visit South Africa, which directly competes with Russia on the diamond and gold markets.