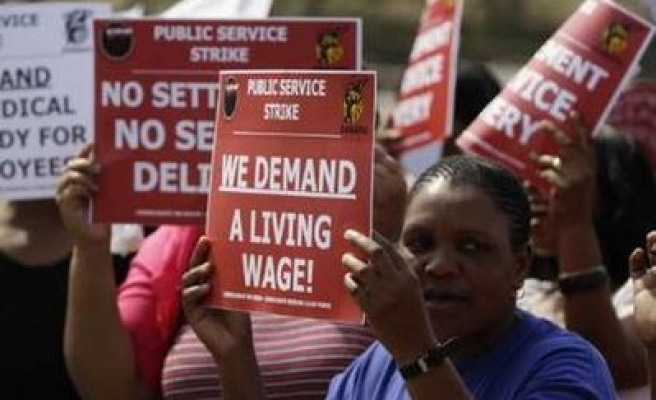 Striking South African state workers staged a protest march on Thursday after rejecting a revised wage offer aimed at ending their three-week strike that has the government and the labour movement at loggerheads.

The majority of unions, most of which are in the largest labour federation COSATU, voted against the offer on Wednesday, prolonging a strike by 1.3 million state workers that a prominent economist said was costing about $150 million a day.

The strike has shut schools, led to bodies piling up in state morgues and thrown cold water on the national euphoria over hosting the June-July football World Cup. It also has dampened investor sentiment for Africa's biggest economy.

The government has said it cannot afford the offer it has on the table, let alone anything higher, and will have to make cuts elsewhere to meet it.

"There are behind-the-scenes political discussions going on. I cannot give more details but leaders will continue to work for a solution," COSATU Secretary General Zwelinzima Vavi told Reuters.

A formal bargaining session between labour and government officials planned for Thursday will now likely to take place on Monday as unions seek more time to persuade their rank-and-file members to reconsider the offer, officials said.

"We expect to hear from unions after they consult members. It's unlikely that they will be done today," Dumisani Nkwamba, spokesman for the public service ministry, told Reuters.

Hundreds of striking state workers dressed in red T-shirts, sang and shouted in a protest march through the streets of Johannesburg, calling on government to meet their demands.

The government, which offered workers a 7.5 percent pay raise and 800 rand ($110) a month for housing, has said it will be forced to make budget cuts and seek funds to pay for it.

The housing allowance total is twice as much as the government spends on environmental protection and nearly double the cost of a new plan to expand antiretroviral therapy in the country with one of the world's highest infection rates of HIV/AIDS.

The unions, whose state sector members include prison guards, teachers, nurses and immigration officers, have been demanding a rise of 8.6 percent, well above the 3.7 percent inflation rate, and 1,000 rand for housing.

"Simply put, there is no money available. The resources to cover the draft agreement proposal will have to come from reducing expenditure in other areas in the budget," government spokesman Themba Maseko said.

Union leaders said they would continue to consult their members, and labour sources said they felt the offer had not been properly explained to the rank and file, indicating they were trying to reverse the vote and seek approval for the deal.

"People have rejected purely on the figures. They don't fully understand that the agreement has some positive aspects. We will try to explain this during the consultations," a union official who did not want to be named told Reuters.

A threatened sympathy strike by all the nearly 2 million members of COSATU-affiliated unions temporarily was put on hold on Wednesday, easing concerns about a walkout that could hurt mining and manufacturing in Africa's largest economy.

Suspending the sympathy strike, which could have shut the mining sector that is responsible for about 5 to 6 percent of GDP, removes some of the pressure on President Jacob Zuma's ruling African National Congress to reach a deal fast.