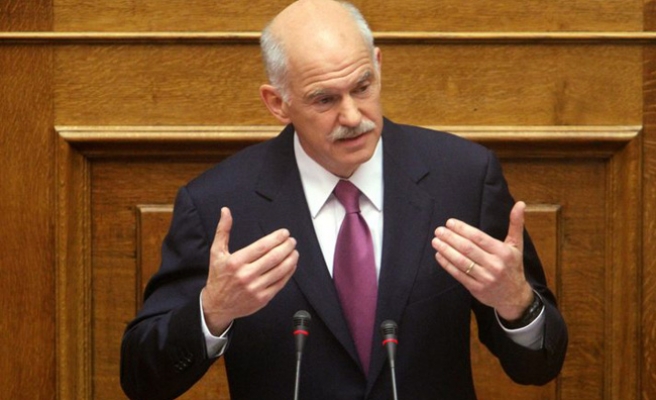 S&P is the last of the three major rating agencies to warn of a default after euro zone leaders and banks agreed last week that the private sector would shoulder part of the burden of the rescue package that offers Greece more cash and easier loan terms to keep it afloat.

S&P said in a statement that the outlook on its rating is negative.

Under the proposed restructuring, which would also require a contribution by private sector bondholders estimated to total as much as 50 billion euros by mid-2014, banks and insurers would voluntarily swap their Greek bonds for longer maturities at lower rates.

S&P said it sees the restructuring as a "distressed exchange".

"In our opinion, the terms of both the exchange and rollover options appear unfavorable to investors," S&P said, adding: "Under our criteria, we characterize a distressed borrower as one that would -- in the absence of debt relief -- fail to pay its debt on time and in full."

S&P said the purchase of Greek sovereign bonds in the secondary market would not be viewed as a selective default because the transactions would be entered into voluntarily.

However, it added: "In our opinion, the likelihood of a future default on the new securities is likely to remain high."

"We anticipate that we would assign a low-speculative-grade rating to Greece, given our view that Greece will likely continue to be burdened by high debt to GDP (gross domestic product) of just under 130 percent of GDP at end-2011 and uncertain growth prospects even after the debt restructuring is concluded."

Moody's on Monday cut Greece's credit rating by three notches to Ca, just one notch above default, to reflect the expected loss implied by the proposed debt exchange.

Fitch currently rates Greece CCC, broadly in line with Moody's, and it has said that Greece will likely be in temporary default as a result of the bond swap.

Standard and Poor's said on Wednesday that it was likely to assign a higher rating once the bond exchange is completed.

"On conclusion of the exchange and/or bond buybacks, we would likely raise the sovereign credit rating on Greece to a level commensurate with our forward-looking opinion on the likelihood of future defaults given Greece's adjusted debt profile," it said.