Prime Minister Mariano Rajoy did not touch pensions - keeping one election promise - and said the tax burden was being shifted from direct taxes on labour and income to taxation on consumption. 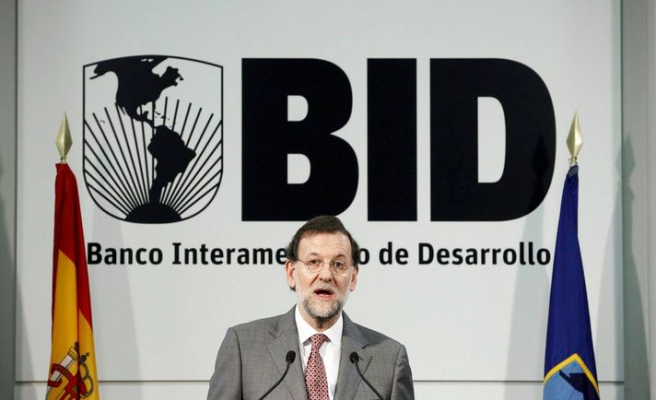 Prime Minister Mariano Rajoy announced a swathe of new taxes and spending cuts on Wednesday designed to slash 65 billion euros from the budget deficit by 2014 as recession-plagued Spain struggles to meet tough targets agreed with Europe.

Rajoy, of the centre-right People's Party, proposed a 3-point hike in the main rate of Value Added Tax on goods and services to 21 percent, and outlined cuts in unemployment benefit and civil service pay and perks in a parliamentary speech interrupted by jeers and boos from the opposition.

"These measures are not pleasant, but they are necessary. Our public spending exceeds our income by tens of billions of euros," Rajoy told parliament.

He also announced new indirect taxes on energy, plans to privatise ports, airports and rail assets, and a reversal of property tax breaks that his party had restored last December.

However, he did not touch pensions - keeping one election promise - and said the tax burden was being shifted from direct taxes on labour and income to taxation on consumption.

Outside in the streets of Madrid, hundreds of coal miners who had staged a march from northern Spain protested against cuts in mining subsidies they say will put them out of work, as public discontent over austerity measures grows.

With five years of economic stagnation and recession, unemployment at 24.4 percent and tax revenue falling, Spain is struggling to meet tough deficit cutting targets agreed with the European Union.

The high deficit and weak banks, which will receive up to 100 billion euros in European aid, are now at the centre of the euro zone's debt crisis as investors fret that Spain could join Greece, Portugal and Ireland in needing a sovereign bailout.

Madrid's borrowing costs have soared in recent months, with the yield on the 10-year government bond breaching the 7 percent level regarded as unsustainable in the long run. On Wednesday, that yield fell to 6.81 percent.

The EU agreed on Tuesday to give Spain more time, until 2014 instead of 2013, to bring the public deficit down to 3 percent of gross domestic product and relaxed this year's goal to 6.3 percent. However, a European Commission document said even that easier target would be difficult to reach.

With the latest measures, Rajoy completely overhauled his previous budget plan, in which the central government and 17 autonomous regions had put in place some 48 billion euros in savings for 2012, insufficient to bring the deficit into line.

It was not immediately clear exactly how much of the 65 billion euros headline figure was new savings.

The prime minister, who had pledged in his election campaign last year not to raise VAT, said he now had no choice. The main rate will rise to 21 from 18 percent and the reduced rate to 10 from 8 percent in a move that could further depress consumer spending.

"We are living in a crucial moment that will determine the future of our families, our youth, our social welfare and all our hopes," he said. "That is the reality. We have to get out of this mess and we have to do it as soon as possible."

As Rajoy announced the new austerity measures, hundreds of coal miners marched through the centre of Madrid to protest against a previous 60 percent cut in coal subsidies that they say will shut down mines and put them out of work.

The miners, who had walked some 400 km (250 miles) from the Asturias region over 44 days, were joined by thousands of supporters, including labour activists, on Wednesday after receiving a hero's welcome in the capital on Tuesday night as they marched in with lamps lit on their helmets.

Public anger over spending cuts has risen as school and hospital budgets have been hit.

"Without the mines we don't have anything, absolutely nothing in our region," said one of the miners in the protest, Albano Gonsalvez.

With nearly one quarter of the workforce and more than half of young Spaniards without a job, the government said unemployment benefit would fall to 50 percent of previous earnings from 60 percent after the first six months on the dole.

Rajoy said the measure was intended to increase the incentive to look for work.