Other groups including members of disaffected youth-led movement Los Indignados were expected to join the march, starting at Plaza Cibeles. 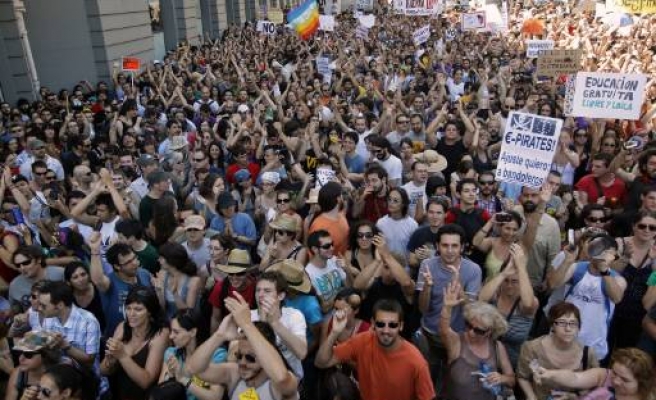 Thousands of Spanish trade union members were set to march in central Madrid on Tuesday evening to protest against debt reform that they say puts social spending at risk, as governments across Europe attempt to push through austerity measures to stem the euro zone crisis.

Other groups including members of disaffected youth-led movement Los Indignados were expected to join the march, starting at Plaza Cibeles and ending at Puerta del Sol where Los Indignados members camped out for almost a month earlier this year to protest against Spain's political and economic system.

Youth unemployment tops 40 percent in Spain and one in five workers are jobless. The Madrid march is organised by Spain's two main unions, the CCOO and UGT, and comes on the same day workers across Italy strike in protest against government austerity plans being debated today by Italy's senate.

Tuesday's march follows others organised last week by Los Indignados and comes a day before the upper chamber votes on the reform which puts a debt brake in the constitution and on a separate law setting specific limits on the structural deficits of central and regional governments.

Both are likely to pass as the Socialist government and the mainstream conservative People's Party are in favour.

Spain's two main political parties struck a rare political truce over the debt-brake, arguing it is essential to show markets Spain is credible about its debt management, but smaller parties, such as the United Left and the Catalan and Basque nationalists, object.

They say the reform has broken an agreement by parliament when a deal was struck that turned Spain into a democracy, and they want a referendum on what would be only the second change to the constitution since Spain became a democracy in 1978, three years after the death of dictator Francisco Franco.

Prime Minister Jose Luis Rodriguez Zapatero proposed the debt brake after a Franco-German summit proposed it to euro zone countries as a measure to reassure markets.

Last month Spain's bond yields came perilously close to levels which forced Greece and others to ask for bailouts, and recovered only after a sustained campaign of bond buying by the European Central Bank.

Spain's deficit is at the heart of concerns it may need a bailout like Greece, which has been plagued by social unrest over austerity measure.

Union protests have had little influence on the Spanish government's commitment to austerity measures.

Spain has pledged to bring its headline public sector shortfall, one of the highest in the euro zone, down to 3 percent of GDP by end-2013, in line with EU guidelines and expects to have cut it to an expected level of about 6 percent of GDP at the end of this year from 11.1 percent in 2009.