Concerns have been intensifying about the health of French and Italian banks, which are heavily exposed to euro zone sovereign debt problems. 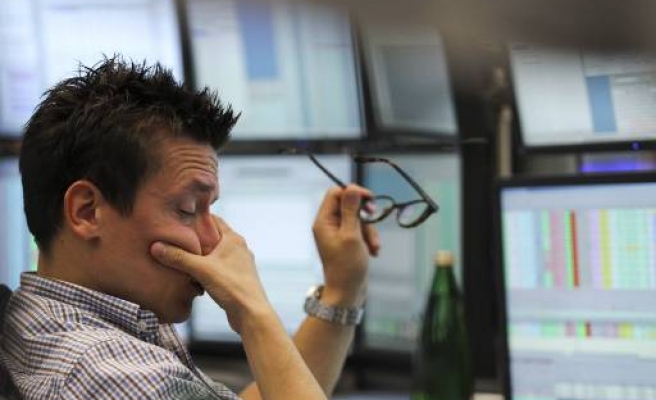 Jittery investors drove stocks lower on Thursday after an early bounce and moved back into safe-haven German bonds as concerns about the euro zone banking system and signs of funding stress resurfaced, ending a brief foray into riskier assets.

In a fast-moving market, the euro pared gains and oil fell, while renewed buying by the European Central Bank pushed Italian and Spanish government bonds higher. The dollar briefly jumped above 77.00 yen from near record lows, but dealers reported no action from Japanese monetary authorities.

European banks sought to secure dollar funding beyond one week in the currency derivatives market, pushing one gauge of funding costs to its highest levels since the 2008 crisis as investors and banks hoarded funds to protect themselves from further market volatility .

Societe Generale , which suffered a share price collapse on Wednesday, and French banking peer BNP Paribas both fell 5 percent at one point while trading in some Italian banks were suspended for excessive volatility.

Concerns have been intensifying about the health of French and Italian banks, which are heavily exposed to euro zone sovereign debt problems, but there was no evidence of fresh reasons for Thursday's declines.

"There aren't any fresh rumours, but we're seeing mounting concerns of a systemic risk out there. We haven't seen panic selling yet, but people don't want to be caught off guard," said Lionel Jardin, head of institutional sales at Assya Capital, in Paris.

The MSCI world equity index was down 0.1 percent, having fallen in 11 of the past 13 sessions.

The benchmark index had slipped into bear market territory earlier this week by falling more than 20 percent from its three-year high in May, but had since inched up.

European stocks were steady on the day.

On Wednesday, a stream of rumours about a sovereign rating downgrade of France and concerns about the health of French banks caused the biggest widening in the benchmark index of European credit default swaps since 2008.

All three major rating agencies later reaffirmed France's AAA rating, and said its outlook was stable, but markets remain concerned that French banks are among the most exposed to a worsening of Europe's government debt crisis.

U.S. stock futures were up 0.8 percent, boosted by forecast-beating results from Cisco .

Investors are extremely sensitive about any sign of funding stress in the interbank market, one of the first areas to deteriorate at the early stage of the credit crisis in 2007.

On Thursday, the one-year yen-dollar cross-currency basis -- which reflects the premium for swapping yen LIBOR into dollar LIBOR -- extended its rise to 56 basis points briefly, the highest since November 2008.

Bund futures pared earlier losses to be down 5 ticks in volatile trading, with traders saying the European Central Bank was buying Italian and Spanish government bonds in small amounts to protect the two markets from contagion fears.

"Investors are hugely worried about the spread of the debt contagion and the economic status of the U.S. Each selloff is effectively a cry for help to politicians and central banks to reach a solution to the debt crisis," Jimmy Yates, head of equities at CMC Markets, said.

Italian 10-year bond yields were 4 basis points lower on the day at 5.068 percent, while their Spanish equivalents were 3.4 bps down at 5.004 percent.

The dollar was steady against a basket of major currencies. The U.S. currency had been under pressure from speculation the Federal Reserve may launch a third bond-buying programme to bolster the economy. It has pledged to keep interest rates near zero for two more years.

The dollar was down a quarter percent at 76.59 yen. Investors are wary of possible coordinated intervention after Japanese Finance Minister Yoshihiko Noda said that he would work closely with the global community to maintain market stability.