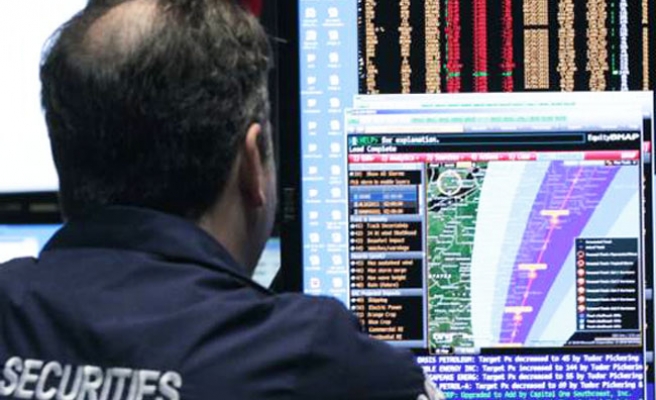 U.S. stocks are setting up for another turbulent week that will begin with a focus, oddly enough, on the weather.

The unusually large storm traveled up the U.S. East Coast on Friday, threatening 55 million people, and was expected to cause billions of dollars in property damage.

Major U.S. exchanges are preparing to deal with power outages and flooding, and that could affect trading on Monday.

For now at least, the NYSE and Nasdaq expect to be open for trading as usual on Monday morning. The Big Board said a final decision will be made Saturday or Sunday, particularly on its trading floor in the low-lying financial district of Manhattan, which could see a storm surge and flooding.

One senior trader at a proprietary trading firm in New York said Friday that Hurricane Irene had destroyed any chance of a rally that had looked likely, given the extent of short positions that had been building in equity markets.

"If this hurricane is a disaster, my guess is we are going to be down 30-40 handles on Monday," he said.

Property insurers Allstate and Travelers hit two-year intraday lows on Friday, partly on worries over claims due to the hurricane.

"We intend to be open, but Mother Nature may have other plans," said Lou Pastina, executive vice president of NYSE operations.

After that, the focus may shift from the Federal Reserve's economic outlook to the August payrolls report next Friday.

Fed Chairman Ben Bernanke, in a much anticipated address to central bankers in Jackson Hole, Wyoming, said most of the burden for ensuring a solid foundation for long-term growth lay at the feet of the White House and Congress.

President Barack Obama is expected to detail plans to create jobs after he returns from vacation the week after next. Investors will have a few days to position themselves ahead of Obama's speech, with the key payrolls report for August due Friday.

"This was clearly a punt from Bernanke to Obama, who will announce a jobs initiative soon," said Lance Roberts, CEO of Streettalk Advisors, an investment management firm in Houston. "The market thinks we may now get stimulus from the government."

In a move opposite to Bernanke's baton-handing to Washington, some say stocks may find a white knight in the European Central Bank's head Jean-Claude Trichet.

Scheduled to speak on a panel at Jackson Hole, Wyoming, on Saturday, Trichet could open the door for the ECB to buy more bonds from countries struggling with rising borrowing costs.

News earlier this month that the ECB was actively buying government bonds in the secondary market boosted equities by giving some relief to investors worried about the credit and fiscal health of the euro zone.

"I'm going to see if (Trichet) is standing by that policy or shying away from it," said Brian Jacobsen, chief portfolio strategist at Wells Fargo Funds Management in Menomonee Falls, Wisconsin.

"If he stands by it, that could be a positive for the equities markets because it's going to suggest that if anything, the ECB will try to step in to handle liquidity problems on the European banking system and they don't have to just rely on the European Union leaders."

sharply lower, with an index of European bank stocks closing lower on Friday for a fifth straight week. The long slide has resulted in European bank shares losing more than one-fourth of their market value.

August is shaping up as the worst month for stocks since February 2009, partly on the belief that the economy was headed for a double-dip recession.

For the month so far, the Dow Jones industrial average is down 7.1 pct, while the Standard & Poor's 500 Index is down 8.9 percent. The Nasdaq Composite Index is down 10 percent, still in correction mode. Those losses for August so far threaten to overshadow the bright spot at Friday's close, when all three indexes ended the day higher and scored their first weekly gains in more than a month.

The payrolls report on Friday is expected to show the U.S. economy created 80,000 jobs this month, according to economists polled by Reuters. In contrast, a total of 117,000 jobs were added to U.S. non-farm payrolls in July.

The U.S. unemployment rate is seen steady at 9.1 percent.

Wall Street will have to deal with a torrent of data throughout the week, including personal income and consumption on Monday, S&P/Case-Shiller home prices on Tuesday, factory orders on Wednesday and the Institute for Supply Management's factory activity index on Thursday.

A Reuters poll forecasts that ISM's August survey is expected to show factory activity shrank for the first time since the recession.