Striking S. African state workers will vote on an increased wage offer made by the government, the union federation said. 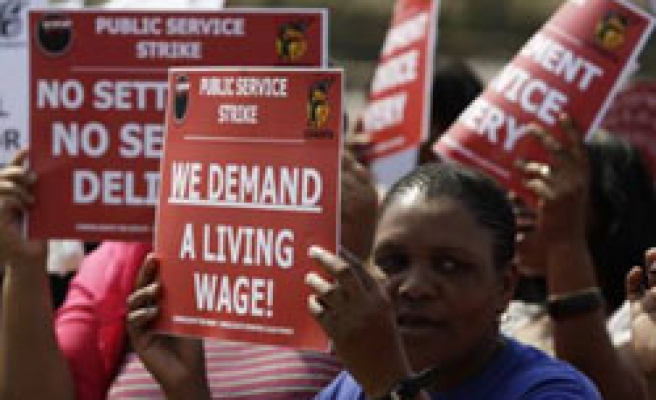 Striking South African state workers will vote on Tuesday on an increased wage offer made by the government to try to end a nearly three-week-old strike, the COSATU union federation said.

The government increased its offer to 7.5 percent from 7 percent -- compared to the union demand for 8.6 percent -- after being ordered back to negotiations by President Jacob Zuma, under growing political pressure over the stoppages.

"The offer will be discussed by members today and they will vote on whether to accept the new offer," COSATU President Sidumo Dlamini told Reuters. "We don't know what members will do. Indeed there has been a shift and we expect members to look at it critically."

Although its impact on currency, bond and stock markets has been minimal so far, that could change if the strike spreads to the broader economy. COSATU has threatened a one-day symapthy strike by all members on Thursday if no deal is reached.

"At this stage, the sympathy strike on Thursday is on hold. It all depends on our mandate from members," Dlamini said.

As well as the proposed wage increase, the government raised its offer for a monthly housing allowance to 800 rand ($109). Unions have been demanding 1,000 rand.