Bangladesh's garment industry employs more than 3.5 million workers, the majority of them women, and is the second biggest employer after agriculture. 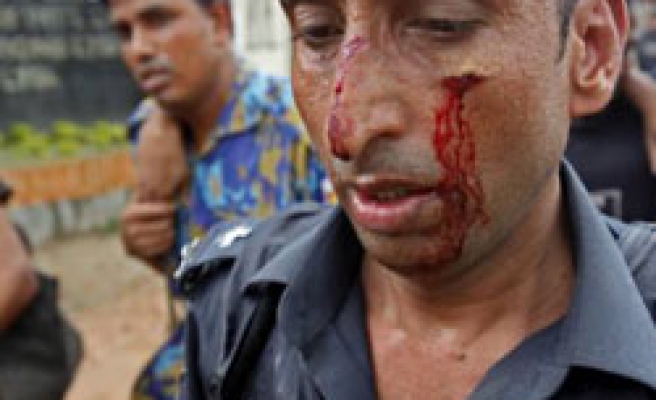 Some 80 people were injured on Sunday as Bangladeshi police fired rubber bullets and teargas, and used batons to disperse textile workers protesting for a third day against a new minimum wage they say is too low.

Bangladesh's garment industry employs more than 3.5 million workers, the majority of them women, and is the second biggest employer after agriculture.

The latest protests were called by unions rejecting a new minimum wage of 3,000 taka ($43) a month announced by the government on Thursday. The new minimum is nearly double the previous amount, but still far short of the 5,000 taka the workers demanded.

Police said a violent mob gathered at Ashulia and Savar, in the capital Dhaka's northern suburbs, blocking a highway for several hours, jeering at police and pelting them with bricks.

Protesters also barricaded a highway at Narayanganj, east of the capital, and battled with police, witnesses said.

Dozens of factories were closed on Sunday, a police officer at Ashulia said, adding that protesters attacked vehicles.

Nearly 250 people, including policemen, were injured in similar violence over the past two days at Ashulia and other areas near the capital.

Prime Minister Sheikh Hasina on Saturday urged workers not to indulge in activities that might destroy the key export sector which contributes some 80 percent of the country's annual $16 billion export income.

She said continuing unrest, that often disrupted production and damaged manufacturing plants, would not benefit workers, but instead could threaten their livelihoods.

Hasina asked workers to return to work peacefully while factory owners said they would reopen closed plants if order was restored.

Bangladesh Garment Manufacturers and Exporters Association, representing more than 4,500 garment factories said they would be compelled to close down factories permanently if the situation did not improve.