Thousands of striking Greek truck drivers lined highways to protest against plans to open up their sector. 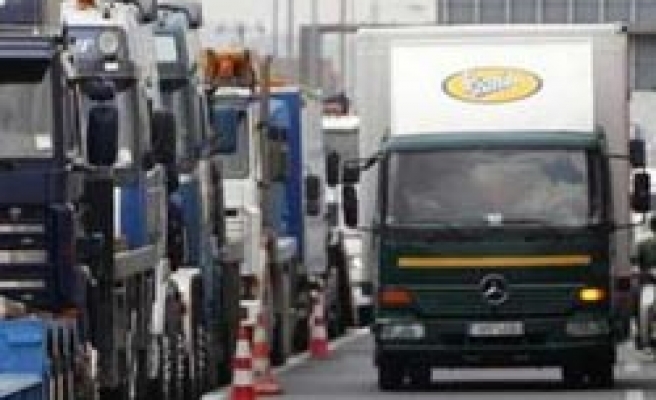 Thousands of striking Greek truck drivers lined highways on Monday to protest against plans to open up their sector, widening resistance to government reforms prescribed in a multi-billion euro EU/IMF bailout.

On the day when Greece's international lenders started an inspection visit before releasing the next tranche of aid, drivers all over the country parked their trucks on the side of the road in a move expected to lead to fuel shortages.

Greece must open up closed professions to improve competitiveness as part of the measures required by the 110 billion euro ($142 billion) package, aimed at pulling the country out of debt crisis shaking the euro zone.

It must fulfill pledges under the scrutiny of EU, IMF and ECB officials, who are in Athens for the next two weeks, to get a 9-billion euro tranche of aid in September.

The socialist government has managed to pass through controversial reforms such as an overhaul of the pension system and has cut its budget deficit but most Greeks oppose the measures and strikes are staged almost daily.

Its first attempt to open up closed professions, lifting restrictions on cruise ship crews, was met with heated protests that affected tourism, a key pillar of the 240 billion euro economy that is seeing its first recession in 16 years.

Road freight is one of the most closed professions in Greece -- along with pharmacists, architects and lawyers -- with no new licenses issued for decades. Some economists say opening up the sector could lower business costs and boost GDP by 1 percentage point per year.

Unions say drivers have paid 200,000-400,000 euros to buy-out a license and would lose out with the plan to change the system over 3 years and cut the price of licenses to cover only administrative costs.

"The state sold us these licenses, our jobs. Some people had to sell their houses to get one of these licenses ... We want justice," said unionist Haralambos Daditsios.

The government will submit the draft bill reforming the sector this week and must adopt it by September.

"It's difficult but we all have to lose something at such times," Greek Transport Minister Dimitris Reppas told reporters. "The country has hit this low point because people put their private interest above the public good. A few gain and the country loses - we can't go on like this."

Gas station owners said the walkout was already affecting their supplies and lines were forming at some gas stations in Athens as consumers filled up while they could.

"By Wednesday, there won't be any fuel left," said George Asmatoglou, chairman of the Athens area gas station owners.