A centuries-old Turkish tradition of offering sweets to guests during Eid al-Fitr has led this festival to be called Şeker Bayramı, or the Sugar Festival. 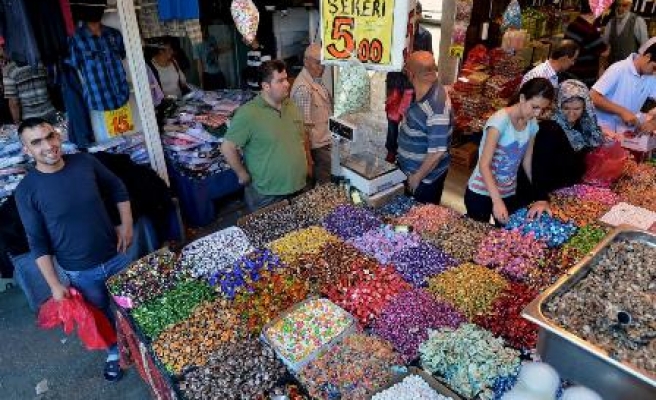 As Ramadan is about to give way to Eid al-Fitr, a three-day religious holiday marking the end of the holy month, Turkish confectionary producers are expecting a boom in sales to spice up their stagnating business through the hot days of summer.

For Turks, sweets are a sine qua non during Eid, which in Turkey is more than a religious festival and is associated with candy. A centuries-old tradition of offering sweets to guests during Eid al-Fitr has led this festival to be called Şeker Bayramı, or the Sugar Festival.

Eid traditionally brings a boost in confectionary sales -- and increased profits. Several days before Eid, Turks buy as many sweets as they can to offer their guests during the religious holiday. Owners of candy shops and patisseries display colorful and delicious sweets to lure in customers. They also sell a lot of gift-wrapped chocolate products. Zekeriya Mete, head of a Turkish sugar and confectionery products promotion agency, told Today's Zaman that his company is anticipating sales revenues in the sector to climb as high as TL 1 billion during the three-day holiday as demand surges.

“The average consumption level of candy in Turkey is 1 kilogram per person per month. This number increases to an average of 2.5 kilos during Eid al-Fitr,” he said. Mete said the Turkish confectionery industry had transformed over the past decade, increasing its quality and appeal, and keeping prices affordable. “The improved production quality and higher purchasing power of consumers in Turkey has also contributed to this shift. … Turks can afford quality and branded candy and cocoa products more than ever. This means added value for the market,” he said.

According to the head of Turkish confectionery group Elvan, Hidayet Kadiroğlu, sales are expected to jump 15 percent during Eid. He told Today's Zaman that dealers are sending early signals of increased demand for his company's products. The prices of sweets haven't generally increased during the past year. One can find a variety of sweets for between TL 3 and TL 7. One kilogram of chocolate varies between TL 8 and TL 10.

Growth in the Turkish confectionary market has been lifting companies' profits, and sugary exports are on the rise.

The Turkish confectionery market grew to TL 6 billion in 2012. Last year, Turkey exported confectionery products worth $2.2 billion. Mete said exports could surge by 40 percent this year over last year, a result of increased promotion activities in emerging markets like the Middle East and Asia. Meanwhile, consumer and health organizations have warned people to be extra cautious this Eid about low-quality sweets and candies that are produced in unhealthy and unhygienic conditions. Some people in Turkey prefer to buy cheap sweets from street vendors. Observers, however, warn that they are putting their health at risk.

Over the weekend consumer unions warned consumers not to allow opportunists to take advantage of Eid al-Fitr's supercharged sales by purchasing cheap candy.

Market experts say unhealthy products can not only damage consumers' health but also contribute to the growth of the informal economy.