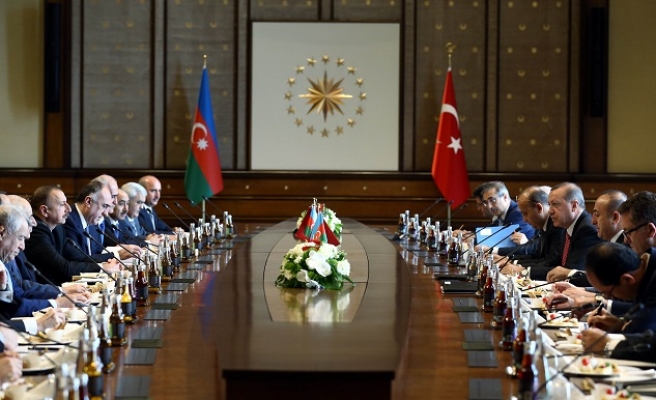 Turkey aims to boost trade with Azerbaijan by more than 50 percent over the next five years, President Recep Tayyip Erdogan said Tuesday.

Trade between the countries currently stands at around $13 billion a year and Erdogan said he wanted to see it rise to $20 billion by 2021. He recognized that slowing global trade and geopolitical considerations would make it tough to reach the target.

Speaking at a news conference in Ankara with Azarbaijani President Ilham Aliyev, Erdogan highlighted the Trans-Anatolian Natural Gas Pipeline (TANAP) as an example of the two nations cooperation.

The pipeline, which will export Azerbaijani gas to Europe, is “progressing rapidly”, Erdogan said, and is due to be completed on schedule in 2018.

“We even strive to complete before the planned duration of the project,” he added.

The Turkish president also indicated the Baku-Tbilisi-Kars rail project, which will link London with Beijing, as the countries’ highest joint priority. The line is due to be opened in December.