Turkey and Azerbaijan to boost investments

Turkish Economy Minister Zafer Caglayan stated that they touched on the topics of trade, politics, cooperation agreements and olympics by President of Azerbaijan Ilham Aliyev. 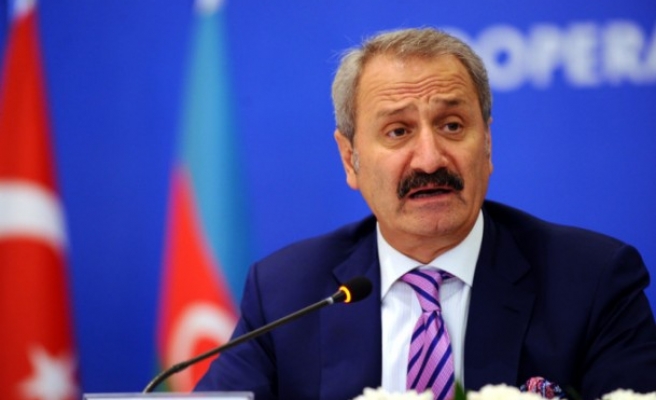 Turkish Economy Minister Zafer Caglayan has stated that they reached consensus on increase in the bilateral investments of Turkey and Azerbaijan.

Minister Caglayan came together with the members of press after the second meeting of economy ministers within the Cooperation Council of Turkic Speaking States (CCTS) in Baku on Wednesday.

Caglayan pointed that his diplomatic talks went well so far and he stated that they touched on the topics of trade, politics, cooperation agreements and olympics and many more matters while being received by President of Azerbaijan Ilham Aliyev.

The Turkish minister said, "A research group under the supervision of Azerbaijani Minister of Economic Development Shahin Mustafayev will come to Turkey and we will inspect and go through each other's sectors. We will go through information technologies, tourism, food industries and discuss if we can work in cooperation. We will share all our experiences with Azebaijanis in order to turn the city of Sumqayit into a city of industry. Some sectors in Sumqayit already invited Turkish firms to invest. Maybe in the future we might set up a Turkish private economic zone in there. Apart from it, ministry's bureaucrats informed Azerbaijani officials about the new incentive system."

Caglayan pointed out that they made a proposal in order to increase the trade, preferential trade agreement and investments between Turkey and Azerbaijan and stated that they are aiming to set up a free trade zone between Turkey, Azerbaijan and Kyrgyzstan and they would like the zone to become a duty-free structure later on.

Minister Caglayan reminded that the third meeting of economy ministers within the CCTS will be held in Istanbul and said that it will be a major meeting than this one in Baku with the attendance of businessmen alongside ministers and bureaucrats.