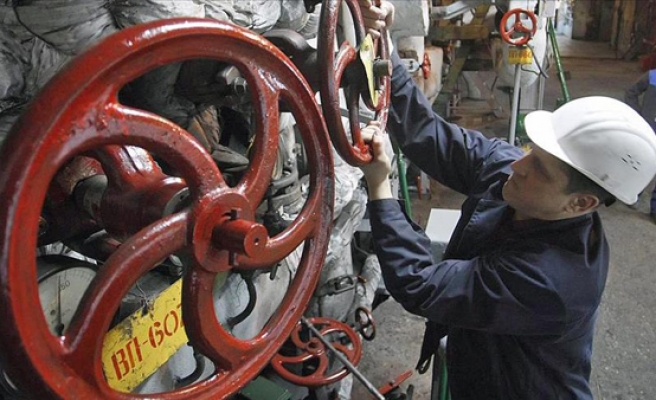 Turkey's Energy and Natural Resources Minister declared the country's support for the Southern Gas corridor on Monday to carry Caucasian natural gas to Europe via Turkey.

The Southern Gas Corridor Pipeline project, which includes the TAP project, is estimated to cost around $45 billion and will include three major pipeline projects: the expansion of the South Caucasus Pipeline through Azerbaijan and Georgia, the construction of TANAP across Turkey and the construction of the TAP through Greece, Albania and into Italy.

Through these interrelated projects, Turkey aims to boost both the country and the region's supply security and enhance Turkey's position geopolitically as a gas hub.

Albayrak explained that the Southern Gas Corridor project was announced ten years ago as a European Commission initiative for the transfer of gas supplies from the Caspian and the Middle East to Europe.

He said that with the help of infrastructure projects between Turkey and Azerbaijan, which have strong cooperation in the energy sector, the Southern Gas Corridor Pipeline project will be nearer its goal of being realized.

“With the Trans-Anatolian Pipeline (TANAP) project, Turkey will receive 6 billion cubic meters (bcm) of natural gas for its domestic needs and transfer 10bcm to Europe. In order to accelerate the Southern Gas Corridor project, it is advised that the Shah Deniz field and the TAP consortium should speed up the construction of both projects,” he added.

“I believe that the entire infrastructure for the natural gas projects will help parties benefit from natural gas and supply security so there will be a strong win-win situation,” he stated.

"Turkey has rich route advantages to carry natural gas more than any other countries in the region, and should use its advantages with concrete projects," he concluded.

Azerbaijani President Ilham Aliyev said that the start of the TANAP construction in 2015 was a significant project for the realization of the Southern Gas Corridor to increase energy diversity.

Energy ministers and representatives of various organizations from the Southern Gas Corridor member-states will participate in the Advisory Council meeting in Baku.