Egypt has been the first destination for Turkish goods worth $16.6 billion in the last five years 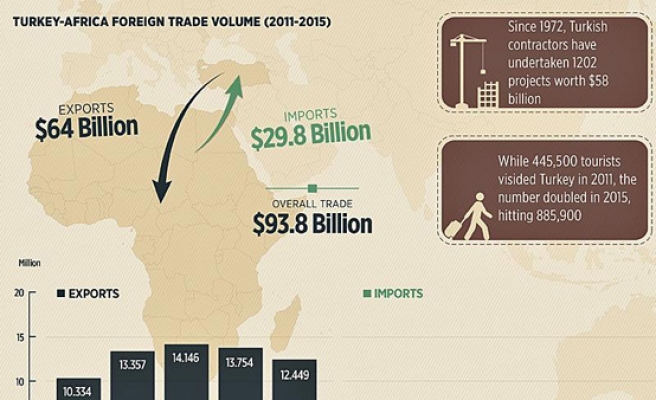 Turkey’s exports to Africa in the last five years have tripled compared to its worldwide export volume, according to data gleaned from the Turkish Statistical Institute, also known as TurkStat.

Exports to African nations increased by 20.5 percent between 2011 and 2015, while Turkey’s overall export volume to the whole world rose by only 7 percent.

Exports to African countries soared to $12.5 billion in 2015 from $10.33 billion in 2011, while imports from the continent decreased by 25 percent to reach almost $5 billion within the same period.

Most of the goods exported to African nations were iron and steel products.

Egypt once again topped the list of Turkey’s importing countries with $7.3 billion. South Africa came in second with $6.8 billion followed by Algeria ($4.5B), Morocco ($3.9B) and Tunisia ($1B).

Main items imported from African countries were oil and gas.

Also, the number of African tourists visiting Turkey almost doubled within the same period, reaching 885,900 in 2015 from 445,500 in 2011, according to the Turkish Ministry of Culture and Tourism.

Also, 1,202 projects worth $58 billion have been completed by Turkish contractors since 1972.

Turkey plans to further increase cooperation and investments with Africa. The Turkey-Africa Economic and Business Forum is due to be held between Wednesday and Thursday, which will be a unique platform for high-level officials, decision makers, business organizations, economic communities and other participants from African countries and Turkey to discuss the challenges and immediate opportunities, according to the event’s webpage.